More than 300 graduates toasted their academic achievements with family and friends at Hartpury’s annual graduation ceremony.

Gloucester Cathedral provided the spectacular setting as graduates from Equine, Animal, Agriculture, Sport and Veterinary Nursing were honoured for the successful completion of their Hartpury University Centre degree and postgraduate programmes on Thursday, October 20th.

They were joined by their parents, siblings, Hartpury staff and governors and honoured guests for the ceremony, which celebrated all that they have achieved at Hartpury. More than 20 trophies and prizes were awarded to students who had demonstrated outstanding academic achievement and commitment to their studies.

One of those prize winners was Yazmin Nicette, who was the top student on the BSc (Hons Sports Coaching) and graduated with a first class degree. She is now enrolled on the Masters in Coaching Science.

Throughout her degree, she worked for another Hartpury graduate, Shane Duff, at his Soccer School in Gloucester. She was also the football activator at Hartpury and is now leading the launch of the new women’s football and futsal programme at Hartpury.

Zoe Fletcher won the Berkeley Hunt Agricultural Cup for the Top Final Year Agriculture Student. As well as helping with the 24-hour lambing rota at Hartpury’s Home Farm, she carried out research on the impact on lambs of having their mother’s colostrum in comparison to another ewe’s when their mother is unable to produce it.

Zoe has also set up a group that travels to Sri Lanka to improve the living conditions of children staying in orphanages, cancer hospitals and homes for the disabled, while also helping the homeless and those living in extreme poverty.

Winner of the Hartpury Postgraduate Scholarship Prize for the top MSc by Research Animal Behaviour and Welfare Student, Laura Cox, has successfully published work undertaken in both her undergraduate and postgraduate dissertation projects.

These studies looked at How Human-Animal Emotional Relationships Influence Public Perceptions of Animal Use and how domestic rats are able to discriminate between quantities. A full list of the prize winners is below.

Hartpury Principal, Russell Marchant, said: “The commitment and dedication shown by our students and staff is something I take great pride in. As always, I felt privileged to be able to share in this celebration of their achievements and I would like to congratulate them and wish them all good luck in their careers and further study.

“I would also like to thank all of our prize sponsors, who make it possible for us to reward those students who have truly excelled in their studies.”

At the close of the afternoon ceremony, Hartpury’s Veterinary Nursing graduates made their declaration to the Royal College of Veterinary Surgeons (RCVS) – a requirement of becoming a registered veterinary nurse with the RCVS. They were also celebrating the fact that they have all secured jobs in their chosen profession since graduation.

A gallery of photos from Hartpury’s graduation ceremony is on our Facebook page.

The World of James Herriot Ltd. Veterinary Nursing Award for the Veterinary Student who has demonstrated the most improvement throughout their studies – Maria Lopez CANO 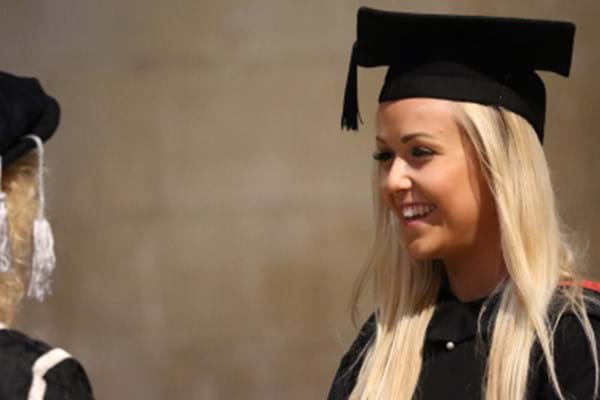