Some of Gloucester Rugby biggest stars and their families headed to Hartpury today to get up close and personal with the College’s cuddly and not so cuddly residents!

They kicked off their tour of the animal collection with a visit to the wallabies, goats and emus before heading to the Walled Garden to see the birds in the aviary, stroke the rabbits and rodents and even feed some wriggly mealworms to the College’s most popular animal residents – the meerkats.

Chloe Afoa, 6, who fed the meerkats with brother, Mateo, 8, said: “The meerkats are cool. I think they have had a nice lunch after we fed them. The mealworms felt very tickly on my hand!”

Next up was the animal collection where the children were infinitely braver than their parents in handling the creepy crawlies! Billy Twelvetrees made a sharp exit when the Chilean Rose tarantula made an appearance, having earlier enjoyed introducing daughter, Matilda, one, to the tortoises and Puff the Bearded Dragon. Billy said: “It’s been a lovely day for the kids. I had no idea all this was here, so it’s been an eye-opener.

Yann Thomas added: “It’s great for the little ones to have the chance to get up close to so many different animals, which they wouldn’t be able to do in a zoo.” Finnely Heinz, 9, who held the Royal Python and the tarantula, said: “It was interesting to hold the snake. I really liked it but it was a bit freaky. It felt a bit sticky.

“I was a bit scared but I really wanted to see what it was like or I’d always have been wondering. The spider felt like a cotton bud!”

John Afoa and Jann Thomas were apparently the bravest among the players, having a go at holding a snake and a tarantula! Along the way, the group learned all about the animals they met and handled from Hartpury staff and Animal Management and Science students, including how to spot a friendly tarantula, the different way snakes and lizards shed their skin, how a bearded dragon’s throat turns jet black when it feels threatened and that mealworms turn in beetles.

Grace Watkins, Head of Animal Management for Hartpury College, said: “It was an absolute pleasure to welcome the players and other representatives from Gloucester Rugby and their families. The children were all so brave and asked some really great questions about our animals.

“It was lovely seeing how interested they were and how much they enjoyed touching and holding not only the fluffy, furry creatures but also our creepy crawlies. I’m sure the children and their parents faced a few of their fears today!” 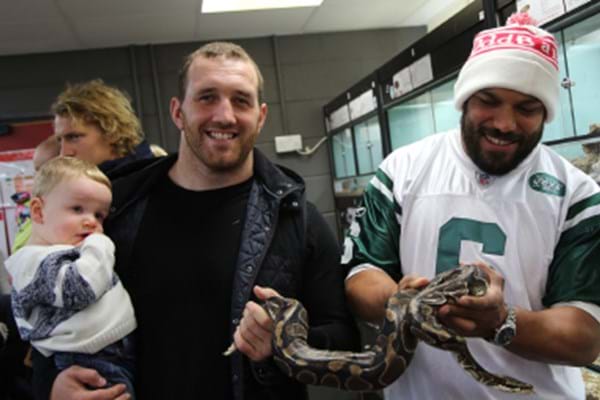