Hartpury’s university team got off to the best possible start in the new BUCS Super Rugby competition with a 29-25 win at Durham last week and now face reigning champions Exeter in Round 2.

Hartpury Director of Rugby, John Barnes, is under no illusions regarding the size of the task facing his charges when Exeter University visit Gloucestershire on Wednesday.

With the top eight rugby-playing universities now locked in a national league format, there are no easy games, but by following their long trip to the North-East with a fixture against a team that they last beat in 2014, Hartpury clearly have had a start that would test any of their peers..

“We know the scale of the challenge facing us on Wednesday. Exeter are the defending BUCS champions and we haven’t beaten them in the past two seasons. It was our home draw against them last season that cost us winning the league and the chance of a home semi-final in the BUCS Championship.” said Barnes.

“They lost last week to Loughborough but we won’t read too much into that and we expect them to offer up a really physical test. They usually have a big side with a very strong scrum and, with seven teams playing at university level, plus a club side, they have a huge player base.”

However recent form, across all of the College’s teams, could hardly be better and last week’s win was just what Barnes was looking for.

“We’ll take a lot of confidence from that result at Durham. It was a game we could have easily lost and the boys showed a lot of character to hold on in front of such a vocal crowd when the pressure was on. To get a bonus point win against such a strong side after a long journey like that was outstanding.”

“Starts don’t get much tougher than the one we’ve had and to kick off a new league with an away win was outstanding. We’ll have a pretty much unchanged side for this week and hopefully we’ll have a good crowd to cheer us on.

We’re keen to keep building that support throughout the season, especially for the games under lights, which I’m sure will have a fantastic atmosphere.”

The match kicks off at 2pm, on Wednesday 12th October.

It’s a busy day of university rugby at the College as the 2nd team are likewise playing Exeter and the 3rds take on Cardiff, both games at home, while the Under-18 AASE XV host Truro & Penwith College at 5pm. 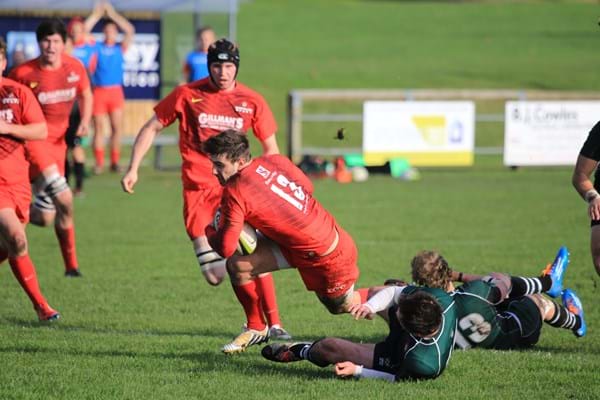