Hannah and her horse Champion Owens travelled to Addington on Monday to compete at the Championships where she was representing Hartpury as an individual. The pair competed in two classes but it was the second class of the day that brought home the honours.

After a long wait in a very large class Hannah was one of the last to go in the KBIS Arena Eventing 1.05m Jumping with Style (JwS) final, waiting four hours for her round as teams and individuals battled it out for top spot.

In a different format to usual showjumping, which is based on penalties and time to complete the course, this class was also about style. The competition consisted of six show jumps followed by 14 cross country style jumps indoors with the final mark being a combination of style, time and jumping penalties.

Hannah steered Owen to a picture perfect showjumping round and then, with a super speed increase, completed the cross country with excellent lines through the combinations to finish top of the podium.

Hannah clinched a style penalty of just one point and with no time penalties to add took the lead to win a rug from sponsors KBIS and other goodies, a fantastic result in a class against competitors from all over the UK.

Hannah, who is 16, is studying BTEC Level 3 Horse Management (Equitation) at Hartpury and is also a member of the Equestrian Club. She said: “It was such a fantastic way to end a very busy season with Owen. It’s such a privilege to own such a willing and reliable pony who always tries his best!” 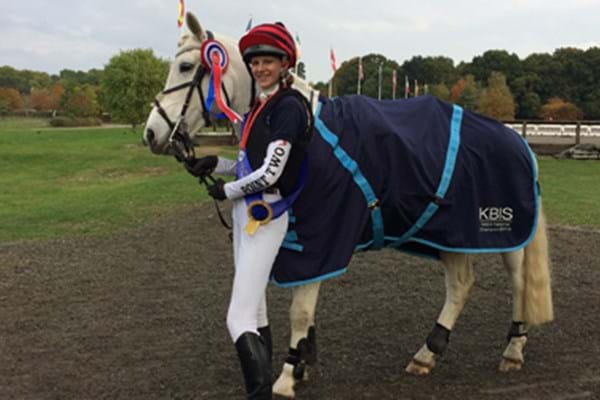