What if…you got in your car today and never made it home? What if…you got the call to say your loved one had been involved in a road traffic collision (RTC)?

These are some of the questions Hartpury students will be asking themselves after taking part in a hard-hitting road safety scheme this month.

In 2013, there were 337 people killed in crashes nationally involving young drivers. Young people make up only seven per cent of full licence holders but account for 20% of road deaths.

Research has found that low risk awareness, overconfidence, inexperience and distractions are the principal factors associated with poor driving in young people.

That’s why all Hartpury College students are currently taking part in the ‘What If…?’ roadshow, which aims to protect young people from the physical and psychological harm caused by an RTC and empower them to be safe and sociable road users.

More than 1700 students Hartpury will witness a hard-hitting road safety film presented by the Gloucestershire Road Safety Partnership that highlights the far-reaching impacts of RTCs.

The film details the story of two young men who were involved in a ‘crash’ in the Forest of Dean in 2015. The pair take the audience on a journey through the event, exploring their emotions and the impact on them. This is accompanied by on-stage testimonies from emergency services, hospital staff and people who are living with the consequences of RTCs, including prosecuted drivers and bereaved family members.

Hartpury Animal Management student, Hannah Payne, 16, from Bourton-on-the-Water, said: “It was really informative and educational. I’m sure it will have a positive impact on the future attitudes and behaviour of our students when they get in their cars and make them better drivers.

Jess Radnor, 16, from Hereford, also an Animal Management student, added: “It showed all sides of the story and how it affects everyone.”

Young drivers and car occupants aged 17 to 24 are at the highest risk of being a casualty as a result of a RTC and, within that group, 19-year-olds are most at risk of being killed or seriously injured.

Students who have seen the show will be made more aware of their personal vulnerability and accountability as riders, drivers and car passengers. A similar scheme in Wiltshire has been effective and, in the 10 years since its launch, they have seen a decline in young drivers killed or seriously injured.

Animal Management student, Caitlin Saville, 16, from Hereford, said: “It was enlightening because you got to hear true stories and how it affected their families.”

Alex Kear, 17, from Gloucester, another Animal Management student, said: “It made you think about getting into a car as you don’t really think about it until you hear it from someone who’s been through it.”

The roadshow follows on from the Wellfest event at Hartpury in September, 2016, run in conjunction with Gloucestershire Road Safety Partnership and Gloucestershire Healthy Living and Learning.

One of the workshops on the day involved driving a go-kart while wearing distraction goggles, which simulate the effects of driving under the influence of drink and drugs. Gloucestershire Fire and Rescue Service demonstrated a casualty extraction from a vehicle which had been involved in an RTC.

The ‘What if…’ project is funded and supported by a number of agencies including the Office of the Police and Crime Commissioner, Gloucestershire Road Safety Partnership, Gloucestershire Fire and Rescue Service, Gloucestershire Constabulary, Great Western Air Ambulance Charity and Severn Major Trauma. 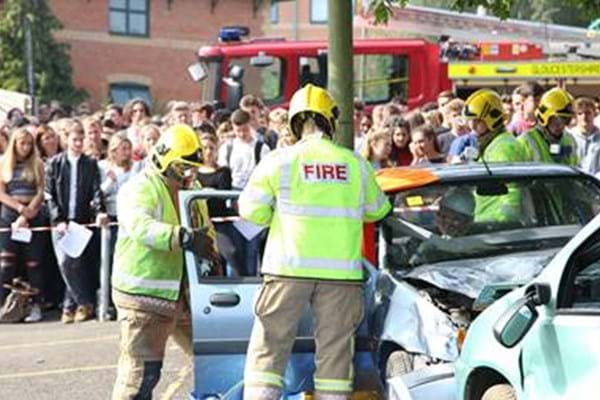