Hartpury Agriculture students had their eyes opened to an alternative approach to sowing the seeds of the future.

Conventionally, once a crop has been harvested, a plough is then used to cultivate the field before the next batch of seeds can be sown. But the traditional furrow could soon be a less common sight on Hartpury’s farmland as new direct drilling machinery comes to the fields.

Weaving Machinery headed to Hartpury this week to show students their mounted direct drill, which distributed over a ton of wheat seed directly into a stubble field.

The drill works by using discs to cut into the soil, creating an opening for seeds to be placed into from the hopper above. The wheels then press the soil back down. This technique enables the growth of crops year on year without disturbing the soil through tillage (ploughing).

Hartpury University Centre Agriculture lecturer, Patrick Tandy, said: “Direct drilling is better for soil structure as it causes much less soil disturbance than conventional ploughing and does not reduce organic matter by oxidation. Increased retention of organic matter increases the worm population, improves drainage, aeration, water retention and ultimately soil structure, which is all good for the soil.

“It’s also more environmentally friendly as the whole direct drilling process uses less fuel per hectare than conventional tilling and drilling. It boosts business too as it reduces our fixed costs and will improve net margins, which are ever important factors for a commercial farm.”

The crop being planted was a further source of excitement for the students as it is a new variety of wheat - a milling wheat called ‘Skyfall’, which can be worth £20 to £40 per ton more than the wheat usually grown at Hartpury.

Agriculture degree student, Benjamin Jordan, 23, who became interested in arable farming when his grandfather’s pig farm was sold, said: “It was fascinating to see the differences in the processes. Traditionally, we would be going over the field twice so this method is so much more efficient.”

Alexandra Growden, 24, who is also studying on the Foundation Agriculture degree, does not come from a farming background but hopes to help farmers in developing countries when she graduates. She said: “Sustainable agriculture is very important to me. It’s so interesting to see these developments in the industry and to think about how you could apply these principles on a much smaller scale.”

Weaving Machinery are based in Chadbury, near Evesham, and all of their machinery is designed and built in the UK. The GD3000M, the smallest of their mounted drills, was the one in action at Hartpury and it has a working width of three metres. Their largest direct drill covers a width of six metres, which could plant around 10 acres per hour. 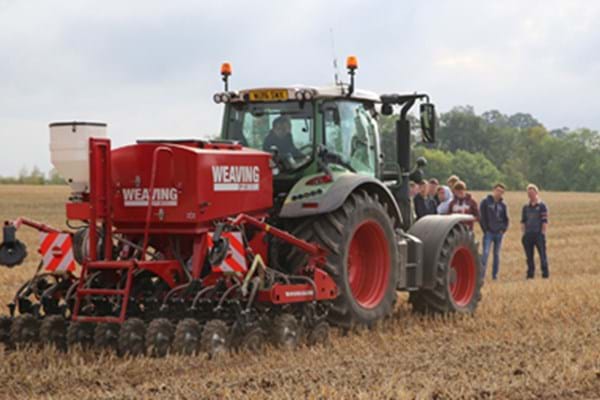