Athletes and teams at Hartpury are seeing their talent and teamwork topped up by technology thanks to new state-of-the-art sports software.

More than 15 of Hartpury’s teams are currently using trailblazing Hudl technology with plans in the pipeline to roll it out across all 10 of the sports academies on offer at the College and University Centre.

The software is putting performance analysis at Hartpury at the cutting edge of developments within the sports industry, as well as improving communication between players and coaches and giving the sporting superstars of the future a tool to market themselves to professional clubs.

Coaches are able to use Hudl to quickly upload video of games, performances and training - not only their own but also those of upcoming opponents and examples of practice they want their own teams and athletes to emulate, learn from or avoid.

The footage can then be annotated and also coded by coaches and analysts, enabling players to quickly move to footage of themselves or to particular phases, set plays or positions in a game or session. Players are also able to use the technology to create and edit play reels that can be set to music to showcase their talent to clubs.

Assistant Director of Elite Sport at Hartpury, Marc Richards, said: “It’s a really flexible tool because the players can access it on their phones, ipads, tablets and laptops and that means analysis and feedback for teams and individuals no longer has to wait until we get the athletes back in for their next training session.

“Players can also clip their own highlights to talk through with their coaches if they want advice or clarification. It’s inclusive too in that a player in the third team could watch clips of a player in his or her position in the first team to get a marker of what they need to do to keep progressing. It empowers the players but also makes them more accountable.

“Because anyone with a log-in can access it on any platform, Hudl also allows us to review player performances when they are playing at club level. There are external clubs, who also use the software, so we can access footage and feedback to keep an eye on how they are progressing. That’s invaluable.”

With the football academy the first to trial Hudl, it has now been embedded across all sports. In rugby, Hartpury RFC, the University Centre first and second team and the College firsts and seconds are all on board, as are the senior and junior women’s rugby first teams. It is also being used by the College netball teams.

There’s no sign of the software take-up slowing down either. Modern pentathlon recently used it for the first time to annotate and provide feedback on a swim training session and the golf and rowing academies are looking at how a slightly different ‘Hudl Technique’ product more focused on the individual and biomechanical elements could add to their analysis armoury.

“This technology and it’s take-up is only going to grow, so it’s fantastic for Hartpury to be at the forefront of its implementation,” added Richards.

“At the moment, we’re using it mainly for performance analysis for teams and athletes but we can also use it for group messaging and we can use tagging to gather stats on things like corners and free-kicks. Currently that’s only available for football but I know Hudl will be adding other sports to that mix.

“In the future, I can see it having a role to play in coach education and teaching and even in performance support services like strength and conditioning. The possibilities for a major sport and education facility like Hartpury are endless.”

For Hartpury’s senior rugby teams, team manager Justin Smith, who is doing his Masters in Sports Coaching at Hartpury having completed his Sports Coaching degree, is in charge of coding the games and uploading them to Hudl for the coaches and players to review.

James Forrester, who plays centre for Hartpury RFC and the BUCS rugby team, said: “Justin will put the coded footage on Hudl and John Barnes (Hartpury director of rugby) and Mark Cornwell (RFC head coach) will clip it and comment on it.

“We’ll have that to review on a Sunday ready for us to discuss on a Monday or Tuesday, depending on what games we are involved in that week. From a player’s perspective, it’s a really good way for us to identify what we need to do better but also to take on board and act on feedback from our coaches, both as individuals and as a team.” 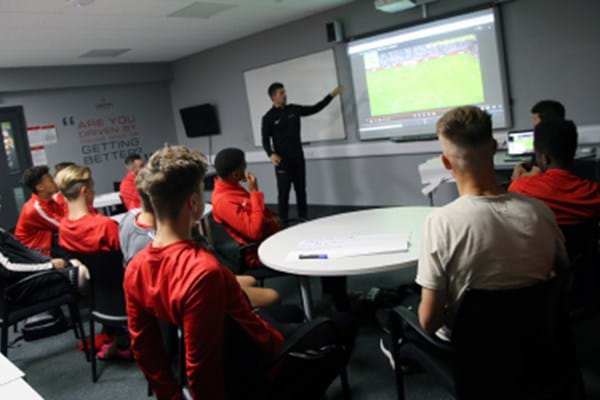