Hartpury University Centre’s first team put in a clinical performance to do the double over Durham and stay at the summit of the BUCS Super Rugby league.

The 21-3 success maintains the incredible unbeaten run for all three of Hartpury’s top teams and sees the University Centre team move a step closer to a potential Twickenham date in March.

The early exchanges were pretty even with play largely concentrated between the 22s as the defences held firm.

There was some early excitement when Hartpury scrum-half Harry Cochrane fed fly-half Sam Leeming and winger Rhys Tudor looked to collect his delicate chip ahead but he was in front of the kicker.

Durham then dominated possession for a spell and there was danger when a lovely offload from winger Ali Neden unleashed centre Tom McLean, who cut a nice line before switching back to Neden. He chipped through and it slipped through the hands of home full-back Maliq Holden but the ball went dead.

Realising serious patience would be required to breach the seemingly impenetrable Durham rearguard, Hartpury then started to use the pick and go to eat up the yards with the back row trio of Harry Agnew, Callum Bowden and Morgan Morris all to the fore, and Cochrane providing quick ball at the rucks when required.

They were turned over though within metres of the line when they became isolated and the Durham counter-attack eventually reaped a penalty shot for fly-half Nathan Holmes on 21 minutes but it missed the target.

Hartpury were starting to look more incisive though and, eventually, they found some wriggle room. Cochrane was quick to pounce on a loose Durham ball and it provided the attacking platform for the ball to be fired out left.

Although the initial move ran aground as the pass left the centres, the ball was recycled through the ruck, with flanker Agnew picking up at the base, spotting a gap and charging through before barging past the final defenders to score by the posts. Leeming converted for a 7-0 lead on 23 minutes.

When Hartpury then disrupted a Durham drive on the fringes of their 22 to win the penalty – their front five again outstanding - it kick-started a sustained attacking spell with Agnew again marauding through as the back row and the backs showed some lovely handling skills to stretch the visitors’ defence.

It was a lovely kick ahead by Holden that provided the breakthrough though as the ball was chased hard and Durham’s clearance was charged down by Morris, the ball coming back into Hartpury hands.

The pack used the pick and go to commit the defence with the line in their sights before the ball was moved at electric pace out of the ruck through the half-backs to winger James Neal to cruise in. Leeming converted on 34 minutes for a 14-0 advantage that lasted into half-time.

The hosts started the second half in confident mood with Forrester cutting a nice angle to collect a pass at pace and go close to a score inside the opening two minutes.

He was almost in again a minute later with an excellent pick up after good work by Holden and Neal but it was a deft looping pass from the ever-present Cochrane that finally proved the key to opening up the defence, prop Alfie Barron inching Hartpury closer before hooker Luke Stratford powered over. Leeming converted for 21-0 only five minutes into the half.

Durham looked like fashioning a response as winger Neden scythed through on a touchline break but an excellent tackle saw him tackled into touch just short, although replacement Ben Cook did pop over a penalty to cut the deficit on 61 minutes.

They could find no way through the Hartpury wall though, with the hosts showing good composure and looking to counter when they could without taking unnecessary risks.

There were late moments of magic as great vision and quick thinking by Cochrane and Holden almost sparked another home score but it was not to be.

Coach of Hartpury’s BUCS team, Sean Lynn, said: “The boys did exactly what we asked of them. We forced Durham into errors and our defence was outstanding. Our front five built the momentum and we were able to finish off the opportunities that created.” 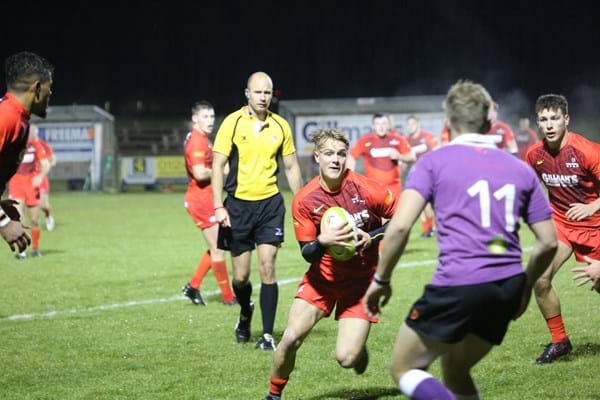