Having welcomed record numbers of new students on to campus this term, Hartpury has also recently opened its doors to some cuddly creatures who were without a home.

Cracker the Syrian hamster and two ferrets, known as Maggie and May, now call Hartpury home after the college was contacted and asked if they could take on the rescue animals and offer them a permanent residence.

The ferrets had been found stray in the Midlands and were not claimed or reported missing. After initially being kept in isolation to get them settled in their new surroundings, the mischievous pair are now being gradually introduced to their new ferret friends in the college’s existing collection.

Aleks Lipinska, Hartpury’s Animal Collection Manager, said: “Both girls are very well behaved and good to handle, which suggests they had previously been pets. They will make a good addition to our ferret family as we believe they are under two years’ old. It will be good to add some younger ferrets to the group.”

Cracker, a six-month-old Syrian hamster, is also now finding his feet at Hartpury after facing homelessness when considered unsuitable for sale by a local pet shop.

He was aggressive with humans but after a few weeks of persuasion from the team at Hartpury, he is starting to appreciate human company and will soon be joining the rest of the Hartpury hamsters.

The trio will become part of Hartpury’s collection of more than 70 species. The collection provides College Animal Management and Science students with opportunities to get hands-on knowledge and experience of the care and correct handling of each species, which will benefit them in the world of work. The animals also present research project opportunities for University Centre students.

First year Level 3 Animal Management student Nathan Davies, 16, and Molly Cox, 17, both from Cheltenham, (pictured) both appreciate the opportunity to gain experience of handling and caring for a wide range of species during their studies.

Nathan said: “Being so hands-on boosts your confidence in looking after the animals as we know we are learning the correct techniques.”

Molly added: “It’s really exciting to be actually working with the animals, not just sitting in a classroom learning about them. It helps our understanding as we can put into context the theory we are learning.” 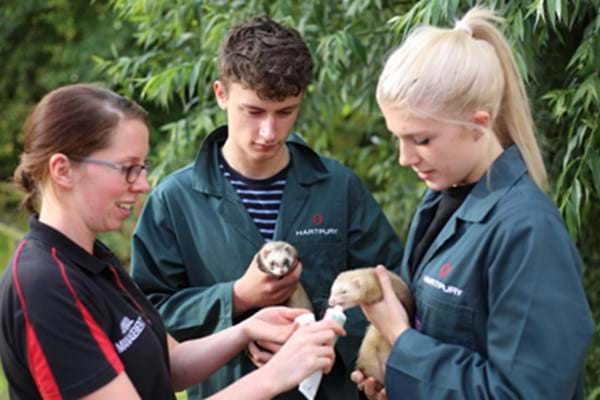