It was standing room only as students and staff remembered the fallen at Hartpury College’s annual Remembrance Day Service today.

Students from the Uniformed Public Services course welcomed visitors and gave out Orders of Service for the ceremony in Hartpury’s international indoor equine arena.

The readings included a letter written by a soldier to his daughter in the event of his death in service, the poem ‘In Flanders’ Fields’ by John McCrae, Rifleman Cyrus Thatcher’s letter home and a positive message of hope from Kirianne Curley, who lost her husband, Corporal Stephen Curley, in Afghanistan, when her son was only 17 weeks’ old.

RAF Wing Commander, Carrie Rossi, also led the “We will remember them” responsive reading (The Kohima) following a two-minute silence.

The service was led by the chaplain, Phil Metcalf, which ended with Julian Brand from the Salvation Army playing ‘The Last Post’.

Hartpury Principal, Russell Marchant, said: “It was wonderful to see so many of our students and staff paying their respects to the servicemen and women who have lost their lives serving their country. The two-minute silence was impeccably observed, all the students were a credit to the college and particular thanks to the Uniformed Public Service students who acted as stewards.” 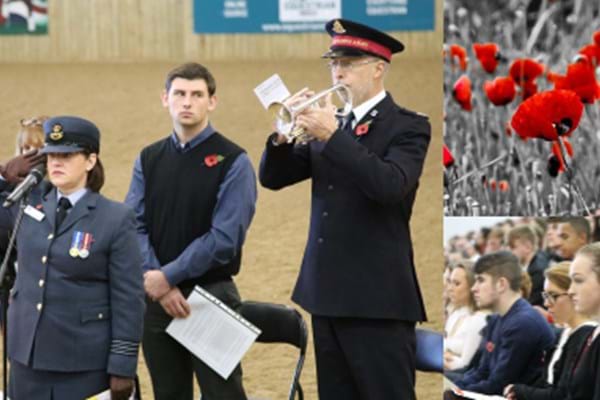