Hartpury student Harry Leach flew the flag for his city on a challenging course aimed at pushing and perfecting leadership potential.

Diploma in Sports Coaching student, Harry, spent a week in the Forest of Dean on an eye-opening leadership course, along with dozens of other young people from the area.

The Rotary Youth Leadership Awards (RYLA) course, which runs every summer and is now in its 11th year, is specifically designed to improve the leadership skills of young people aged between 16 and 18.

Each of the 69 Rotary Clubs in the district (which ranges from North Somerset to Worcester), selected a representative to take part.

Harry, 18, was selected to represent the Gloucester-based Kingsholm Rotary Club after two of their members interviewed him and identified that he had the kind of leadership potential that RYLA aims to nurture. Hartpury College then sponsored Harry to take part in the six-day long residential course.

Dan Robinson, Assistant Head of Sport at Hartpury College, said: “When I asked for volunteers for RYLA, Harry immediately seized the opportunity. He certainly made the most of it and has been successfully using the skills he learned in many aspects of his coaching course here at Hartpury.”

The course included a variety of physical challenges, teamwork and leadership exercises, which were designed to encourage participants to push themselves and test their limits.

Harry, who comes from a military family, said: “I considered myself very confident going into the course, but the first day was a real surprise, so much so that my team chose the name ‘Deep End’ as that’s what we felt we had been thrown into!”

After an initial round of ice-breakers, the participants split into groups for tasks over the next few days. Outdoor activities such as canoeing and an exciting high ropes obstacle course were interspersed with lessons on communications skills. The course culminated in a talent show on the final evening – the highlight of which was the ‘Rotary Haka’.

Harry added: “On the final evening, everyone had really come out of their shells; the difference from the beginning of the course was astonishing. The highlight for me though was the fundraising we did in Monmouth where we collected almost £400 in one morning for a charity close to the hearts of two members of our group – Place2Be.”

Hartpury Principal, Russell Marchant, said: “We were delighted to be given the opportunity to participate in this worthwhile initiative through the Kingsholm Rotary Club, I am personally very pleased for Harry that it has been such a positive experience.” 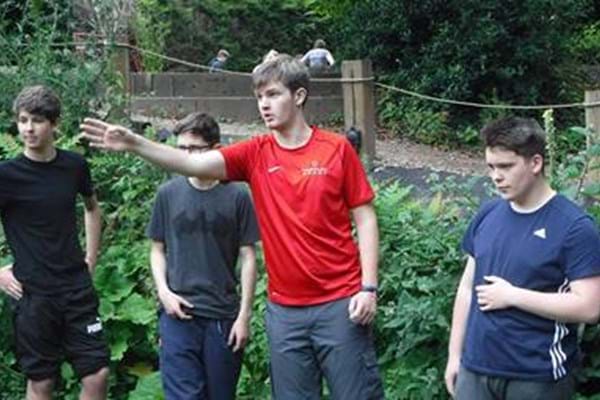