Hartpury student Sandy Fotheringham will be hoping to put in a statuesque performance for his dad at next year’s Wild Water Canoe World Championships after the proud father built a 15-foot hay bale replica of him so he can continue making waves in his sport!

Fotheringham, a land-based technology student at Hartpury College who specialises in kayak river racing, will be hoping to go somewhat faster than his stationary look-a-like as he aims for the top spots at next year’s Under-23s and Junior World Championships in Austria.

“I’ve only seen pictures of the bale statues my dad made,” Sandy said. “I haven’t been home since I started at college so I haven’t actually seen them in person but they look cool.

“The whole idea is to help raise awareness and hopefully get us some sponsorship for future races.

It’s not cheap to race when you include travel, accommodation and race entries.”

Fotheringham actually started out in canoe slalom – an event people are familiar with from the Olympics – but now comperes in wild water river racing, which involves getting from top to bottom on a given course as quickly as possible.

Within river racing, there are two classes - classic and sprint. Sprints are around a minute long whereas classic events tend to involve 15 to 20 minutes of racing, although Sandy recently raced a classic event in Pau which was 11 minutes long.

When he competes for Great Britain at the World Championships in Austria on July 26th, 2017, Sandy has set his sights on going better than his top 20 finishes at the pre-worlds – an event which ran recently as a precursor to next year’s championships.

In his first year racing for Great Britain, he finished 17th in the classic event, 13th in the sprint and fifth as part of the team classic event.

Before the Hartpury student can turn his attention to the championships, he has his sights set on keeping his GB spot at the upcoming selection trials for the event. Over the two-day event, Fotheringham will have one shot at qualifying as one of the fastest racers in the classic event before a best of two runs for the sprint spots.

Fotheringham, who has been kayaking for around seven years, is hoping that the college’s new multi-sport academy – which supports athletes who are not part of Hartpury’s current academy offer – will help him to improve his fitness and conditioning ahead of the qualifiers.

“Hartpury give me access to the power gym and a trainer to make sure that I’m training correctly off the water and I’m able to see the physio too,” he said.

“It’s tough to fit everything in with my course and all my training but Hartpury are really helpful in making everything balance as best as they possibly can. There aren’t many places where I could mix learning more about agriculture with being able to further my sport at a high level and benefit from this level of facilities and support.”

Sandy’s younger brother, 16-year-old Wills, has also been immortalised in hay-bale form at home on their Scottish farm as he competes in canoeing for Great Britain. And despite the closeness in their ages, the difference in disciplines mean there is little chance for rivalry between the two.

“Because Wills and I race different events – he’s in a canoe and I’m in a kayak – it means that it’s hard to race each other or really have any kind of rivalry,” said Sandy. “Plus. It would be totally unfair as I have a paddle with two ends whereas he only has one with one!

“We do travel round a lot together though and both of our parents are really involved. Mum takes us a lot of places and dad gets out when he can – he obviously runs the farm back at home so it’s more difficult for him.”

Sandy, who is a few months into his land-based technology course at Hartpury, has high hopes for the future and says he hope to take over the running of the family farm alongside his brother.

“I want to get more qualifications and learn as much as I can,” he added. “I’d love to continue my studies at university, potentially doing a degree at Hartpury.

“I want to really broaden my land-based tech knowledge as technology is such a massive part of farming nowadays. There really isn’t anywhere better than Hartpury to do that alongside making my sporting ambitions come true.” 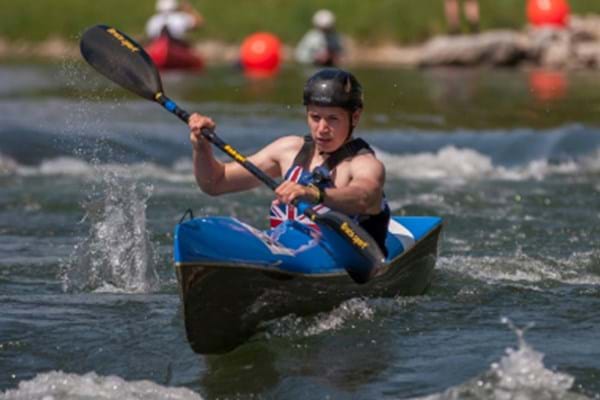