Rewind five years and former Bristol City scholar Scott Wilson’s dream of being a professional footballer had stalled and he wasn’t sure where to turn next, but this year has seen the 23-year-old graduate from university and win an academic prize on top of securing a professional contract.

Having spent the last five years at Hartpury University Centre, the new Eastleigh recruit has returned to professional football with a degree in his back pocket just a few years after being released by his hometown side, Bristol City.

“If I hadn’t come to Hartpury, I wouldn’t be where I am today and I have a massive amount of gratitude towards all of the coaches and lecturing staff that I’ve worked with,” Scott said.

“I didn’t know what I was doing with my life really [after being released by Bristol City] and Steve Guinan [Hartpury’s former senior football manager and former Cheltenham Town player] was the one who brought me to Hartpury. He said get a degree behind you, play football full-time with us and we’ll see where you end up and I’m delighted to say that I’ve achieved all my goals, albeit a few years down the line.”

Wilson, who has previously played for Gloucester City, Cinderford and Bath City, had expected to begin the 2016-17 season on Weston-Super-Mare’s books but an offer from National League side Eastleigh saw him sign professional terms ahead of the Hampshire side’s pre-season preparations.

Not only has the speedy striker realised his dream of playing professional football but he also has something that only a minority of professional footballers hold – a degree. Wilson initially struggled academically at Hartpury but after some tough choices, hard work and help from the teaching staff, he recently graduated, winning a top student award in the process.

“I’m not going to lie; it was a tough road for me academically,” he said. “I began doing a sports coaching degree but after two years, I didn’t pass, so I sat down with Marc Richards [senior football manager at the time], Dean Seeliger and Rich Whincup [lecturers] and changed course (to Sports Business Management). I’m delighted to be standing here today as a graduate and I can’t even put into words how much the help I’ve had has been the key to getting me to where I am today.”

The 23-year-old, who helped Hartpury to back-to-back BUCS University National Championship finals and scored the winning penalty in Hartpury’s 2014 triumph, has found his time on the pitch limited recently but he has set his sights on improving and continuing to push himself with the National League club.

“The aim for every footballer is obviously to play as high as they can and it would be amazing to replicate someone like Jamie Vardy but I’m just going to concentrate on playing as best as I can and giving everything to my team,” he said.

“I’m hoping to carry on playing professionally until I retire and then once I’m done with the game, I would love to move into the sports management sector.”

With thousands of players linked to professional clubs released every year, Hartpury’s college and University Centre programmes offer a great chance for players like Scott to develop their football and study at the same time, reaching their potential on and off the pitch.

Scott said: “If there is anyone around who finds themselves in the same position as me - a bit lost after being released by a professional club and not sure what to do – Hartpury is the best option outside of professional football, I would choose it over anything.

“I’d say to them, go and get your degree, play for Hartpury and if your goal of getting back into the professional game doesn’t work, then you have a great degree behind you. If it does work out, even better, and then when your career starts to wind down, you still have that degree to fall back on once you retire from the game.”

Wilson will be hoping to feature over the next few games as Eastleigh, who are seventh in the National League, travel to Swindon Town in the FA Cup before taking on York City, Gateshead, Aldershot, Chester and Maidstone, including four games in 10 days towards the end of November. 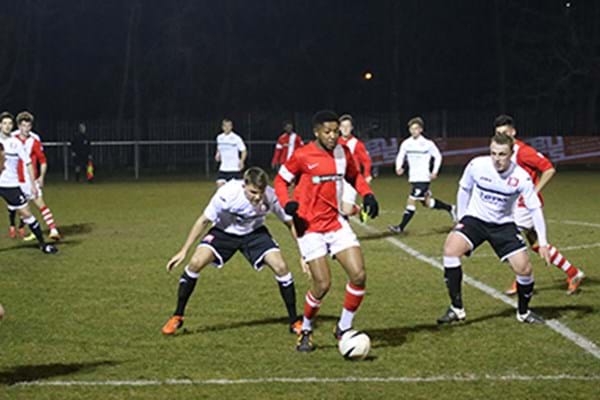