Gloucester Hartpury were away to Worcester last week as they hoped to maintain their winning form in and keep them at the top of National Championship Midlands Two going into the Christmas break.

The home side started well but Gloucester-Hartpury’s indiscipline saw them conceding three penalties back to back, the last of which was kicked for Worcester to take a 3-0 lead.

This seemed to galvanise the visitors who started to put together some continuity. After a few minutes flanker Gemma Sharples streaked down the wing for the opening score which was then converted by Chloe Limbrick.

Full back Mary Ann Gittings seized the opportunity of a loose kick to set off from her own half, storming down the pitch untouched for a second try, also converted by Limbrick.

The Gloucester-Hartpury forwards then started to really impose themselves with strong ball carries from Kathryn Buggy and Amelia Lavalee, enabling the backs to be on the front foot. Lauren Graham broke the gain line and a quick ruck and quick hands down the line saw Gittings in for her second try which Limbrick converted again.

Milly Wallis has made a smooth transition from centre to flanker and lead from the front with her imperious carries. Ex England A number 8 Carey along with Sharples and Wallis were in dominant form with Worcester able to do very little to stop the trio.

A line break from Wallis, closely supported by Carey, saw the space open up for the ever impressive Beth Jones to score. Limbrick again added the extras for the visitors for them to head in to the break 24-3.

Gloucester-Hartpury were now in a confident mood and playing some impressive rugby but a few mistakes and needless penalties kept Worcester in the game. Half back pairing Godby and Limbrick moved the team around the field with Limbrick a constant threat.

Ruddock was searching off her wing and was rewarded with a try in the second half. Gittings closely followed suit to score a hat trick before making way for Chloe Barton. Barton was eager to impress and got on the end of a backs move to score.

Showing her versatility, Wallis moved to centre and was a constant thorn in Worcester’s side, combining with Jones who scored her second try. Limbrick then capped of an imperious performance to skip through the defence and score to tie up the game with a 55-3 win.

Gloucester-Hartpury Coach, Susie Appleby, said: “This was a really good finish to the first half of the season. It wasn't perfect but we are learning to manipulate defences and when we cut out the errors and sped the rucks up we scored some really nice tries.

“The really exciting thing is having so many young players stepping up and staking a claim for a starting shirt. There is huge competition for places now, the club is in a really good place. I can't wait for the second half of the season as we've got a lot more to come.' 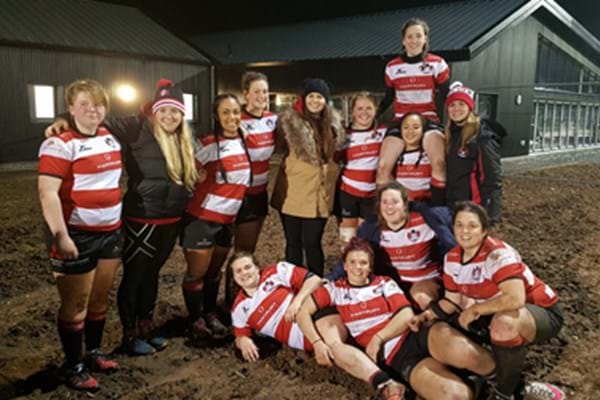