Meet Ruby Tuesday, the rare red and white calf who is breaking up the monochrome pattern of the Holstein-Friesian herd at Hartpury’s Home Farm.

The special addition to Hartpury’s 300-strong dairy herd landed on the straw at Home Farm this Halloween. The tiny calf was born weighing just 18kg, less than half the expected size for a calf of her breed, and covered in reddish brown patches instead of the usual black – a colouring known as “red and white”.

Named Ruby Tuesday, she is only the second red calf to be born into the herd in the last 10 years. Her red and white predecessor sadly died earlier this year and came from a completely different genetic lineage. This means Ruby is in no way related to the last red and white cow, making her the product of pure genetic chance.

Janatha Stout, Director of Agriculture at Hartpury, explained: “This distinctive coat colour is rare among traditional Holstein-Friesian dairy cattle as it is caused by a recessive gene. Both the bull and the cow need to be carrying the gene for the red and white colouring to occur.

“This is the case with Ruby’s mother, who is black and white, but she must have passed on the recessive gene, giving Ruby Tuesday two red and white genes.

“She does have black eyelashes which means her red patches may turn black with time, but we will have to wait and see.”

After her first calving at approximately two years’ of age, Ruby will become part of our dairy herd. And she’s already become a big hit with Hartpury’s Instagram followers. She has become one of the most “liked” pictures we have ever posted!

Students on our agriculture courses get involved in calving and calf rearing as they gain work experience and practical skills in the dairy. As well as this, students from other courses such as Veterinary Nursing and Animal Management conduct practical sessions at the farm, where they have the opportunity to get hands-on with the cows and calves. 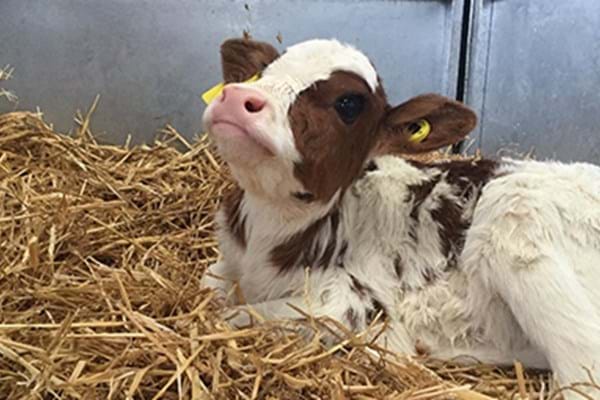