Big names from the British showjumping scene will be getting their eye in ahead of Olympia alongside some of Hartpury’s own riding talent at this year’s Showjumping Spectacular.

Starting on Friday 9th December the showjumping runs for three days in the international Hartpury Arena.

The action kicks off on Friday afternoon with a warm up for the top tier Small Tour and Big Tour classes followed by the first legs for these classes, which dictate the order for the high-stakes Grand Prix classes the next day.

On Saturday morning top combinations such as Hickstead Derby winner Trevor Breen riding Loughnatousa WB will be contesting the Small Tour alongside some fantastic young talent, including Oliver Fletcher.

Competition in the Big Tour Grand Prix is set to be even tougher as last year’s winner Robert Bevis will be defending his title against the likes of John Whitaker MBE, on his Olympic mount Ornellaia, an in-form Joe Clayton and Britain’s leading lady rider Laura Renwick.

There are also some well-known local riders who will be keen to perform in front of a home crowd including Gloucestershire-based Rachel Gallop and Herefordshire-based Emma Slater, who has supported numerous Hartpury students when they have assisted her as trainee grooms.

The weekend’s competition is rounded off with two qualifiers for the Blue Chip Winter Show Jumping Championships 2017, which will be held here at Hartpury next April.

Following in the hoof prints of Olympians like Tim Stockdale should inspire the strong contingent of students who are competing in the Amateur A and B tours.

Six Hartpury riders will contest the A Tour Grand Prix, including Rebecca Sim, on her mare Queen of Carrickadawson, and Zoe Nicol riding 12-year-old gelding Kingsleigh. They will be joined by Hugh Lennard, Rebecca Daniel and Georgina Johns-Powell who are all riding their own horses.

Fellow students Kieran Masters, Georgia Cabb and Marine Delanoë will take to the arena in the B Tour Grand Prix.

It is sure to be a fantastic show with the course designer poised to challenge the competitors at every turn. There will be plenty of opportunity to see legends of the sports taking on the young guns. Entry to spectators is free of charge so everyone who wants to catch some of the action is welcome to visit. There are also VIP Hospitality lunch packages on offer if you want to treat yourself or a loved one to a fantastic day out. 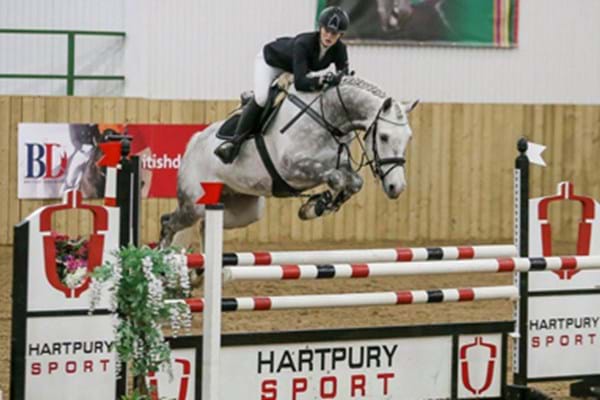