Hartpury student Scott Jones broke a world record on his way to a gold medal as the college’s rowers picked up seven podium spots at the British Rowing Indoor Championships.

Jones, 18, from Cheltenham, smashed his personal best on the way to a world record time of 3.47:4 in the Arms and Shoulders category at the event in London over the weekend.

The Sports Performance degree student’s time in the one kilometre event was 12 seconds faster than his previous best (3.59:5) and saw him finish a full 23 seconds clear of his nearest challenger, Poland’s Jaroslaw Kailing.

A further six medals were picked up across the event at the London Olympic Park with Bryony Lawrence and James Cartwright, who only began rowing earlier in the year having been identified through the GB Rowing Team Start programme, picking up second places in their respective 2km time trials.

Lawrence continued to impress in her transition from junior to Under-23 level as the Sport and Exercise Nutrition degree student grabbed silver in the Women’s Under-23 lightweight category, finishing just a few seconds off top spot and more than half a minute clear of her nearest rival.

A Level student James Cartwright, 15, secured a silver in the Under-18s boys event where his time of 6.18:1 was enough to see him into second place by five seconds.

The College’s rowers also claimed a further four medals in the 500m sprint events as Cartwright and Lawrence picked up their second medals of the day while Zoe Adamson and Hannah Cooper rounded off the day with gold and bronze in the same event.

Adamson’s time of 1.34:9 saw her grab gold in the Under-18s female event with Cooper finishing just over a second behind her in third place to earn her a bronze medal. Cartwright went one better in the Under-18s boys event, finishing top with a time of 1.21:6 to add gold to his earlier silver medal while Lawrence repeated her 2km result by picking up a silver medal in the women’s Under-23s 500m event.

Hartpury’s rowing coach, Tom Pattichis, said: “There were a lot of good results this weekend with many of our rowers recording personal bests, which is really great to see so early in the season. Scott’s world record was a bit of a bonus as it wasn’t something we were necessarily expecting, but we weren’t surprised given his continued progress. Everyone raced well and now our challenge is to transfer these results onto the water next year.

“We always really enjoy coming to this event, particularly as it’s a good chance for us to gauge people’s progress so far and obviously we’ve enjoyed a lot of success here over the years. It’s great to see it growing in popularity and with medals increasingly hard to win, its pleasing to see our rowers still picking up podiums.” 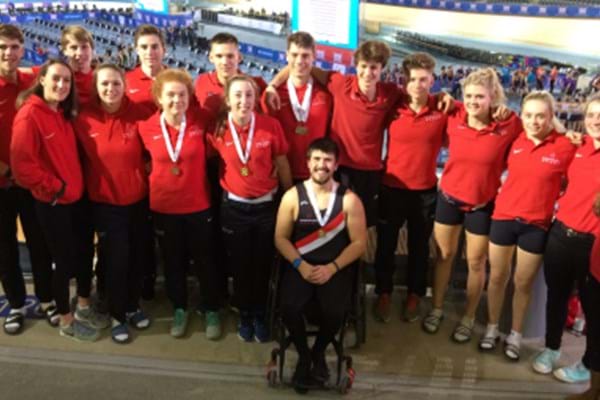