Equestrian heroes supported Hartpury’s first ride through the night as they saddled up for a 24-hour sponsored simulator ride for Spinal Research.

The event, which followed the official opening of the Margaret Giffen Centre for Rider Performance, saw VIPS, local people, staff and students taking it in turns to ride Hartpury’s Racewood horse simulators throughout the night, including new addition Margaret – based on flight simulator technology and the first of her kind in Europe.

The ride coincided with Hartpury’s Showjumping Spectacular and international showjumping legend Tim Stockdale made an impromptu appearance to round off the 24 hours.

With the sponsored ride open to everyone, there was a choice of ‘Hercules’ for the novice rider or Margaret for those with more experience. Persuaded by another star of the showjumping world, Tina Fletcher, Tim put Margaret through her paces as he jumped a ‘virtual’ showjumping round supported by fellow Great Britain showjumping legend, Peter Charles MBE, whose son Harry also took part.

Alan Davies – ‘super’ groom for Charlotte Dujardin’s dressage world record holder horse Valegro - completed a stylish cross-country course round, while staff from all areas of Hartpury College and University Centre got involved, from governors to catering staff. Students also joined in, complete with ball gowns, having come straight from the Winter Ball! There was even a police presence as Special Constables took to the saddle!

Principal lecturer in equine therapy and centre manager, Kathryn Nankervis, said: “Over the course of the 24-hour ride, we were joined by riders of all ages, abilities and experience and from all walks of life.

“To have Tim Stockdale round the event off cheered on by students, staff and some of the biggest names in British showjumping was just the perfect finale, especially as Tim has himself fought back from a potentially life-changing spinal injury.”

The 24-hour ride was in aid of Spinal Research, the UK’s leading charity funding medical research around the world to develop effective treatments for paralysis caused by spinal cord injury.

Spinal Research community fundraiser Louise Wheeler said: “It was brilliant to meet all of the staff and students involved in the ride and to see Hartpury raising awareness for Spinal Research. Unfortunately, about half of the people and families we see are horse riders that have had accidents.”

Hundreds of pounds have been raised so far with donations still coming in and hopes to reach £1000. You can still show your support by donating to Spinal Research on the event’s justgiving page at https://www.justgiving.com/campaigns/charity/spinalre/hartpury 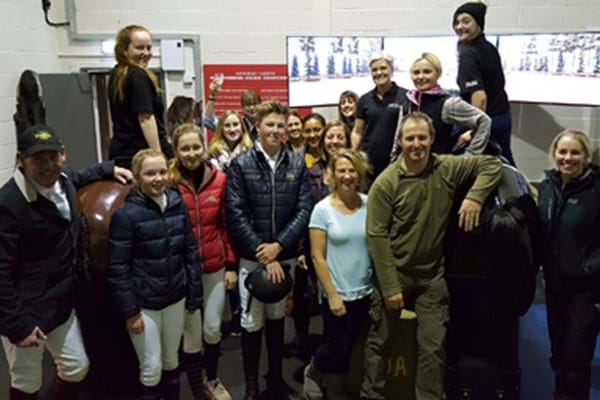