A Hartpury graduate whose work is helping to ‘create a better world through rugby’ will be hoping to kick off his 2017 in style by picking up a British Council alumni award.

Masters in Coaching Science graduate, Ryszard Chadwick, who works as a Development Manager for Play Rugby USA (PRUSA), is up for the Social Impact award, which recognises those ‘who have made an exceptional contribution and commitment to creating positive social change and improving the lives of others’.

Chadwick has worked across a number of roles since moving Stateside in 2013 but his main role for PRUSA - a non-profit organisation whose mission is to develop youth through rugby – sees him manage a 10-strong team that recruits the best Under-19s players from public schools in New York City for a year-long development programme, playing a mixture of Sevens and 15-a-side.

He said: “The programme is about bringing them on as people as well as rugby players. As well as elite training and coaching, they complete modules that help with their overall development and gain support in the search for the right university for them and scholarships.”

The Alumni Awards celebrate the outstanding achievements of alumni. Award winners and finalists are leaders in their fields who have used their experience of studying at a UK university to make a positive contribution to their communities, professions and countries.

Chadwick, who completed his Masters after his degree in Sports Coaching at Hartpury, will found out if he has won between January and March next year when award ceremonies take place across 10 countries, including the USA, Ghana, Greece, Hong Kong, India, Mexico, Saudi Arabia and Thailand.

Since making the journey across the pond, he has interned with the USA national team as well as working closely with the IRB, travelling around the country delivering coach qualification courses. Recently he has taken up a role as the Northeast’s Director of High Performance, tasked with helping to identify, develop and prepare sevens players on the pathway towards national team selection.

He is also the head academy coach for the PRUSA Academy. The academy’s girls team have won two Summer Sevens Championships, reached the semi-final in a national Sevens tournament and are the 15s New York State champions of 2014. The boys are among the top teams in the Empire State area.

“I have no doubt that without the education and support I received from the staff at Hartpury and being part of the unique environment and culture that exists there, I could never have accomplished what I have done this far,” he said.

“I would recommend Hartpury to anyone who wants to be involved in a career with sport; it opens a lot of doors.” 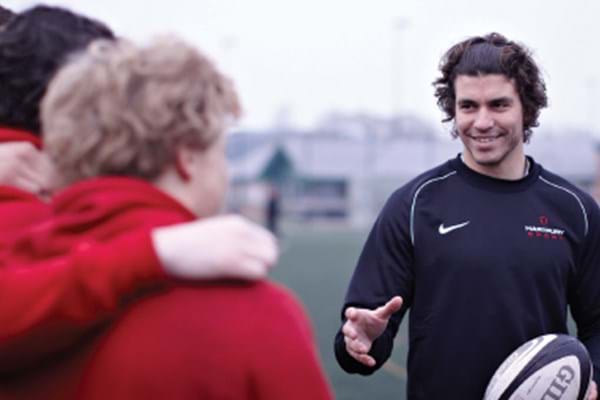