With British showjumping stalwarts facing off against young up and coming riders the scene was set for a spectacle of showjumping. Hartpury did not disappoint, hosting a weekend of exciting competition in the run-up to Olympia.

Louise Whitaker, eldest daughter of legendary showjumper and Olympian John Whitaker MBE, showed her pedigree by scoring the biggest prize of the weekend on Saturday with a horse who she shares the ride on with her father. Fresh from victory at Arena UK, the former European Young Rider bronze medallist rode Prince Sultan Saud’s Leen OL to their second big win in as many weeks in the Baileys Horse Feeds Big Tour Grand Prix.

Julie Andrews had got off to a flying start in the first leg of the Big Tour, winning with Ayrton IV, but the combination had to settle for seventh in the competitive Grand Prix. Meanwhile Louise produced an excellent clean round of jumping from her deceptively speedy mare to score in a close jump-off ahead of last year’s winner Robert Bevis, who narrowly missed out on landing a historic double, as well as Olympian Tim Stockdale and local rider Emma Slater, who finished fourth and fifth respectively.

Another leading lady of British showjumping scored a win when Laura Renwick took the first leg of the Small Tour on Friday evening with the 11-year-old mare Con Chilli. However, the following day it was two competitive young riders who claimed the top spots in the Superflex Small Tour Grand Prix. Graham Gillespie rode his own Laverin De Saar to victory ahead of Alfie Bradstock, a former eventing gold medallist turned showjumper, in a close jump off.

Hartpury’s own students proved that they could mix it with the best of Britain, securing several high placed finishes between them. Equine Academy members put their training into practice on the big stage with some good results for Georgia Cabb and Rebecca Daniel.

Eighteen-year-old Georgia jumped double clear with Graham Fletcher’s Uragan in the Hartpury Equine Amateur B Tour First Leg on Saturday. The Equine Business Management degree student then built on that good form to finish eighth in the Speedskip Amateur B Tour Grand Prix the next day.

Equine Science degree student Rebecca, 21, made an early start on Sunday morning worthwhile by riding her own horse Belasco to fifth place in the Open Warm Up, which was won by Olivia Painter.

Other students who competed and scored placings were Hugo Lennard and Rebecca Sim. Hugo, who also studies Equine Business Management, placed fifth in the Lister Amateur A Tour First Leg when piloting his own 14-year-old gelding Vreymoedt to a double clear. Equestrian Sports Science degree student Rebecca, 21, also secured a top 10 placing in the Cushionbed Amateur A and B Tours Handicap riding her own Queen Of Carrickdawnson.

Phillip Cheetham, Equine Director, said: “In total, there were hundreds of rounds jumped and countless poles picked up over the course of the weekend and it wouldn’t be possible to run such a successful event without the help of our student volunteers and the equine centre team, all of whom worked tirelessly to ensure everything ran smoothly.

“A big thanks to our sponsors and all the spectators for their continued support of this fantastic show as they helped provide the kind of big-event atmosphere that gives our students supporting the event and competing a unique experience. Our rising Academy stars relished the opportunity to compete alongside some of the best riders in the country.”

With a total of 13 classes running over the weekend, there were plenty of valuable prizes to be won and course designer Paul Connor kept the competitors on their toes. John Daker kicked off proceedings by winning the first class aboard Credit Card.

There was also a win for Rachel Horton in the Cushionbed Amateur Warm-Up, James Emblen took the A Tour First Leg while Laura Whittington landed the Andrews Bowen A Tour Grand Prix. James Johnson scored a valuable double by winning both the B Tour First Leg and the subsequent Grand Prix on his own Zorro V.

Sarah Hedges took the first of the Blue Chip qualifiers, heading the Karma Performance Qualifier with Millfield Verve, before Jay Halim won the Dynamic B and C qualifier riding Derby. Emma Slater continued her good form by qualifying in both classes for the Blue Chip Winter Championships which will be held at Hartpury next April. 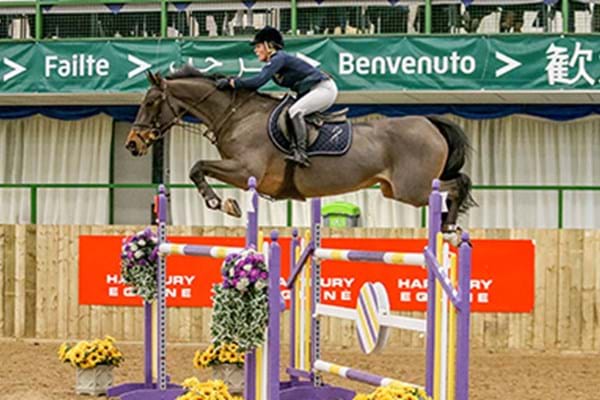