One of Hartpury's best international prospects, Seb Negri, has taken a giant leap forward in his rugby career after signing a two-year deal with Guinness Pro 12 club, Benetton Treviso.

It has been some year for the Sports Business Management degree student. Not only has he captained the Hartpury University Centre first team to the summit of the new BUCS Super Rugby competition and played a part in Hartpury RFC's 16-game unbeaten run that has put them 20 points clear at the top of National League One, the talented back row also won his first full international cap for Italy in the summer.

And now he could be mixing it with the likes of Munster, Leinster, Ospreys and Scarlets next season as he joins Benetton Treviso in July after finishing his degree.

"I am extremely excited to have signed for a club like Treviso," said Seb, who came to Hartpury from Hilton College in South Africa, via a season with the Western Province Academy based in Cape Town.

"It is a great club with a lot of history but it also has some great young players, so I think the future is bright for the team. I met with Treviso and their staff when they played Gloucester a few months ago in the European Rugby Challenge Cup. It was good to see what they had to say and also to understand the vision of the club as well as the role I would play there.

"I could see there are good structures in place and there is a great vision and an exciting journey ahead. There will be challenges too of course but I'm looking to learn from those and use the experience to build my character.

"I want to improve as a player and to do everything I can to become better and I hope I can achieve this at Treviso. It's also important for me to try to push on with my ambitions to earn more caps for the national team and joining Treviso will give me the best opportunity to do that."

When Seb made his debut for the Azzurri in July in a 24-20 win over the USA, he became Hartpury's first Italy international. It capped a rollercoaster summer as he had only been called up by Italy A a month before he got the call to join Conor O'Shea's squad. He had previously impressed for Emerging Italy, who he represented again this Autumn.

But while the University Centre student is buzzing about the prospect of continuing to shine on the international stage and to have signed a professional contract with a top European club, he's not losing sight of his more immediate responsibilities at Hartpury.

As well as completing his degree, he will also be hoping to guide the University Centre team to the BUCS Super Rugby final on March 30th and a triumph at Twickenham - they last won the BUCS Championship in 2014 - and to help Hartpury RFC achieve their ambition of promotion to the Championship.

"Hartpury has been an awesome platform for me and I can't thank everyone enough," he added.

"From my coaches to all the players and staff, I have learned so much at Hartpury and coming here was the best decision I could have made.

"Now that my contract with Treviso has been signed, I will be putting all my focus into Hartpury and achieving all I can before leaving. I owe Hartpury a lot so I want to finish here on a high and give it everything."

Although originally from Zimbabwe, Seb has an Italian father and hence, an Italian passport. In choosing to study and play his rugby at Hartpury, Sebastian is following in the footsteps of his older brother, Tom, who graduated in 2012 and is now a successful sports agent in South Africa.

Hartpury Director of Rugby, John Barnes, said: "As well as being a very talented rugby player, Seb is a very popular student here at Hartpury and his University Centre and RFC team-mates are chuffed to bits for him that he has been given this opportunity.

"He has worked hard and to see that recognised with a professional contract for a top club is richly deserved. We all hope this proves the stepping stone for him to go on to even bigger and better things and we'll be keeping a close eye on his career in future.

“In the meantime, he will continue to play an important role for Hartpury and we'll be focused on continuing his development to give him the best possible chance of success on and off the pitch." 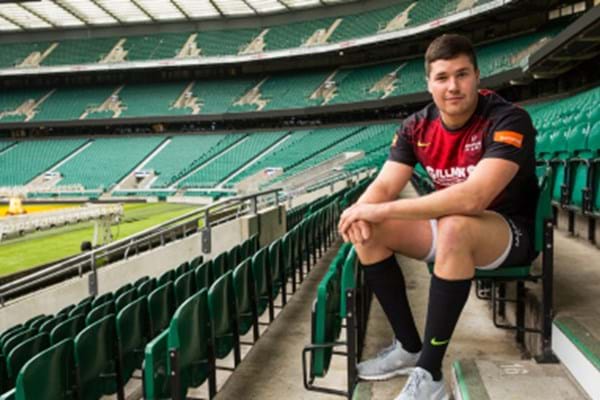