Spurred on by her team and determination to complete an epic adventure in memory of her dad, Kathryn Megan joined other climbers to reach the peak of Mount Kilimanjaro on a snowy New Year’s Day.

After singing Auld Lang Syne at midnight, Hartpury’s equine events manager and her team set off on the final leg of their journey with the aim of reaching Uhuru peak on Mount Kilimanjaro for the first sunrise of New Year’s Day.

Kathryn was undertaking the climb in memory of her dad, John, and to fundraise for the Sue Ryder Manorlands Hospice where he had been cared for.

Although at sunrise, Kathryn still had another two hours of climbing to go, she pushed through her altitude sickness and reached the top of the highest freestanding mountain soon after.

Kathryn said “The feeling we got when we finally got to the top was amazing. We couldn’t believe we had successfully reached the peak of Mount Kilimanjaro. As it was -17°C, we had to keep moving and didn’t get long to celebrate, just long enough to get a few victory pictures!

“The journey pushed me to my limits and by the time we’d returned to camp, we all felt physically exhausted but were still filled with high spirits from the exhilaration of reaching the top.”

Although they only met for the first time on Boxing Day, Kathryn’s team of eight motivated and encouraged one another so they could achieve their goal.

She added “There were quite a few times when I thought I wasn't going to be able to make it but thinking of my dad and everyone that has supported my fundraising over the last year really helped me to keep going.

“Reaching the gate at the bottom the next day was really emotional. There were a couple for us who had done the climb in memory of family members who had spent time at Sue Ryder hospices and I finished the walk in tears thinking about my dad.”

She said: “It really was an incredible experience. At the time I was thinking that I was never going to do anything like this again but driving away from the mountain, I started thinking about what I can do next!”

“The climb up to the summit was definitely one of the hardest things I have ever done but it was a fantastic experience and one I won’t forget.”

In 2015, Kathryn’s dad stayed in Sue Ryder’s Manorlands hospice for just over three weeks before he passed away, benefiting from expert care. The family were also supported practically and emotionally.

Kathryn said “The care that Sue Ryder gave my dad as well as the support they offered me and my mum was amazing.”

The cost of clinical care per individual each day is £500. As the charity treats more conditions than any other UK charity in their hospices, neurological care centres and within the community, Kathryn feels it is important to raise awareness of the great work they do each day and give something back.

Kathryn’s Justgiving page will be open until February if you would like to make a donation to her fundraising efforts at https://www.justgiving.com/fundraising/K-Megan 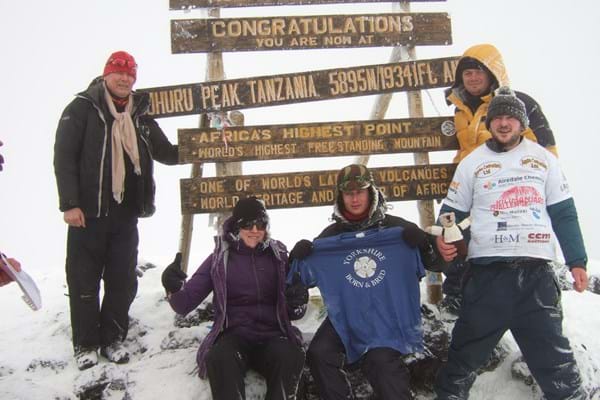