Gloucester-Hartpury women outlined their cup credentials with a 47-13 win over Championship side Hove to cruise into the semi-finals of the national intermediate cup.

Susie Appleby’s side ran in seven tries, six of them converted by fly-half Chloe Limbrick, to book themselves a place in the last four of the cup.

Gloucester-Hartpury were quick out the blocks as Gemma Sharples opened the scoring for the away side with a swift blind side break from kick-off that saw her outpace the opposition full-back to touch down. The team shortly doubled their advantage through Mary-Ann Gittings.

With the visitors two tries to the good Hove began to settle into the game, making good ground with a number of carries from their powerful forwards but it was Gloucester-Hartpury who scored again after absorbing the pressure. Appleby’s side broke with pace and moved the ball wide for Shelley Ruddock to cross for her first of the game.

The home side did register a try and a penalty before half time after a number of missed tackles from Gloucester-Hartpury but Ruddock responded shortly after to grab her second of the game and put the travelling side 26-8 up after the first period.

Hove continued to rely on their pack as the second half got underway and again found themselves gaining a good amount of ground before Sharples completed her brace following a swift break from Gloucester-Hartpury fly-half Limbrick.

Hove did eventually grab themselves another try but the away side soon put the game out of sight as a second from Gittings was followed by Beth Hicks finishing a well-manoeuvred counter attack.

Head Coach Susie Appleby said: “This was a really encouraging performance from the team against a strong Championship side and we’re delighted to come away with the win and to move into the next round of the cup.

“We’ve got a massive game coming up now against Worcester in the league and then we can turn our attention to the semi-final after that.”

Appleby’s side face second placed Worcester this weekend in a top-of-the-table clash this Saturday (March 4th) at Gloucester Rugby’s Kingsholm stadium. The team will feature after Gloucester’s game with Harlequins looking to maintain their unbeaten run and secure promotion to the Women’s Championship. They currently sit top with 11 wins from 11, 13 points clear of their rivals.

The semi-final of the cup is scheduled for the March 12th, 2017 but Appleby and the team are currently still awaiting to hear who they will face in the last four. 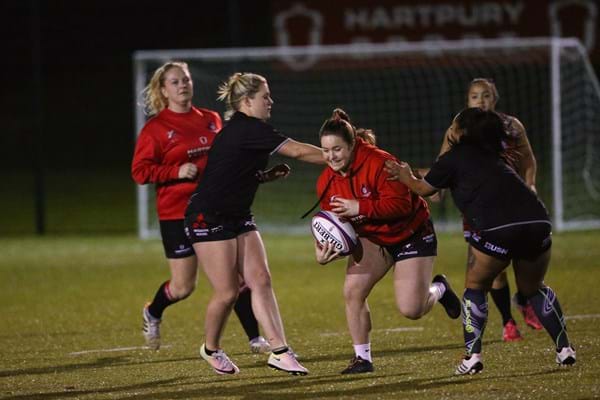