Hartpury’s college footballers will have a chance to crown themselves the best schools and college’s football side in the country when they face Monkseaton in the final of a new national England Schools FA (ESFA) cup competition.

Paul Tassell’s side have made it down to the final two of the inaugural ESFA Under-18 Hudl Elite Schools and Colleges Cup after beating Hasting’s school, Buckswood, 4-2 in the semi-finals at Hartpury.

Tassell said: "I am immensely proud of the squad and staff involved in today's result as it was a team performance against a very strong side with some talented individuals. Everyone contributed to this result and they all deserve to look forward to the final.

“We were disappointed that we were unable to defend our ESFA Colleges trophy which we have won the last two years but this is a new competition and a chance for us to add a new trophy to our collection.

“As the only college side left in the competition we can already say we are the best college in the country at Under-18s level and we’ll be focused on putting in another performance and become the best of the best."

The visitors bought a strong team with a number of international players and tested Hartpury early in the tie, forcing keeper Max Harris into a good save in the first 10 minutes. The first half was a tightly contested affair but it was Hartpury who took control with a five-minute spell just before the break.

Frank Arhin’s volley broke the deadlock in the 41st minute when Brock did well to set the ball back following Adjei’s swift break down the right. And Hartpury doubled their advantage three minutes later, catching Buckswood on the edge of their own box before Arhin slotted under the away side’s advancing keeper.

The second half started much the same as the first with Harris forced into another smart save as Buckswood looked to force their way back into the game. But again it was Hartpury who found the back of the net next as a moment of magic from an Adjei free kick put the home side three in front.

The home side’s advantage was swiftly cut back though as Buckswood replied just two minutes later as Harris was finally beaten as the away side’s centre forward slotted home from a cross.

Hartpury were not to be outdone though and a thunderous Arhin free kick on 72 minutes restored their three-goal cushion. Brock had a good chance to put the tie firmly to bed but was unable to get enough on an Adjei cross.

Buckswood didn’t give up and grabbed another goal back on the 80 minute mark as Hartpury failed to clear on the edge of the box and their striker was able to loft the ball over the advancing Harris.

Despite the advantage being cut Hartpury were able to see out the final 10 minutes and will now face Monkseaton in the final, with the date and location yet to be decided. 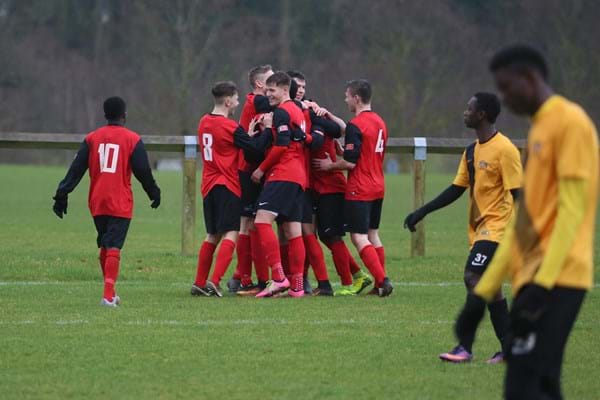