The games were held recently at Cheltenham College, where more than 200 school children took part in athletics and boccia – a sport closely related to bowls played by people with disabilities.

Ten primary schools contested the athletics after qualifying at their local events to secure a place in the county final while in boccia Key Stage 3 and 4 students with special education needs and disabilities competed for the medals.

Thirty-five Hartpury students, who are all first and second years from the Subsidiary or Extended Diplomas in Sport (PE and Coaching), were on hand throughout the day having been asked to help run the event by School Games Organisers. Several Hartpury students even took it in turns to dress up as the infamous “Gloucester Old Spot” mascot to the absolute delight of the children.

Dan Robinson, Assistant Head of Department for FE Sport, said: “After receiving the relevant training from National Governing Bodies and School Games Organisers the students who were asked to volunteer at the event did this quite superbly and without supervision. They also proved popular with the schoolchildren and the noise in the sports hall did, at times, quite literally raise the roof!”

In the small schools event the competition was incredibly close and ended in a tie for gold between Lydbrook and Chalford Hill, with Hempstead just four points behind in bronze. Robinswood took the gold in the large schools competition ahead of Powells in silver and Charlton Kings in bronze.

Tom Hall, Head of Education at Active Gloucestershire, added: “Thank you to the Hartpury volunteers who helped make the event a resounding success – the children had a fabulous day and left with many memories. I look forward to working with the students again at next week’s Badminton event!”

A boccia competition was also run as part of the games and Hartpury’s volunteers worked closely with students from the Cheltenham-based National Star College. Boccia is a Paralympic sport which involves each team taking it in turns to throw coloured balls at a white target ball, or ‘jack’, earning points for landing balls closer to the jack than their opponent.

In the mainstream school category it was Newent who took home gold, ahead of Churchdown in silver and Winchcombe in bronze. In the special educational needs schools category Paternoster won the gold, with Heart of the Forest in silver and Alderman Knight taking bronze.

Julian Ralph, Area Co-ordinator for StarSports, said: “The event went really well with both pupils and staff really enjoying themselves. Everyone worked really hard and the input from the Hartpury with the boccia event was hugely beneficial for the students!”

In June Hartpury will host the Summer Games, a two-day event which promises to have an exciting Olympic and Paralympic feel, consisting of multi-sports finals in disciplines which include archery and mountain biking.” 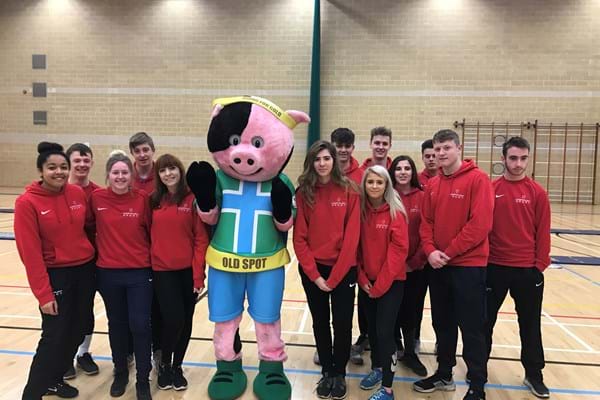