Hartpury's university rugby side avenged their away loss to Loughborough last night as they clinched the inaugural BUCS Super Rugby league title in front of their home fans.

Hartpury edged this hard-fought encounter and both sides now go forward to the knock-out phase of the competition, with Hartpury knowing that they will enjoy home advantage as they seek their first Twickenham appearance since 2014.

In a tense, tight, but never less than compelling match, Hartpury were able to produce the moments of quality that saw them collect two tries to nil on a night where two well-drilled defences gave very little away.

In many respects, these were two very evenly-matched teams and Loughborough played a very full part in a game which held spectators captivated from the first whistle to the last.

Given the importance of the occasion, it was no surprise that both teams were close to full strength.  Loughborough picked a team that would not have looked out of place in National League 1, while Hartpury were able to start with Harry Randall, fresh from international duty with England U20, at scrum half with another age-group star, Scotland’s Alex Craig, on the bench.

Winger Jonas Mikalcius, leading try-scorer in National 1 this season, was also named among the replacements.

It may not have been a high-scoring match, but the teams were keen to keep the ball moving and the early exchanges were lively.  Hartpury, looking solid at the set piece and hungry in the loose, were just about edging it and made the breakthrough in the 14th minute.

Randall, who was impressive throughout, helped the hosts to establish a good attacking position before, off first phase ball, centre Jamie Cooke launched himself through the heart of the Loughborough defence.

Cooke was dragged down five metres short of the line, but inspirational skipper Seb Negri was on hand to keep the attack alive.  When he was stopped it looked as though another big forward would continue the drive, but instead it was Harry Randall who took responsibility and nipped over for the score.

Sam Leeming’s boot added the extras from a good angle.

The game quickly resettled into its former pattern.  Loughborough were keen to bring their lively back three of Will Edwards, Yiannis Loizias and Rotimi Segun into the play as often as possible and Hartpury had to stay sharp in the tackle.

Visiting fly half Owen Waters put them on notice just two minutes after the try, landing a penalty from long-range, the first of four successful kicks on the night.

Loughborough continued to push as the half went on and an offside in midfield following a poorly dealt with ‘up and under’ gave them the chance to kick deep into Hartpury territory.  But the home jumpers got fingertips to the ball and when Hartpury turned defence into attack – Randall again the catalyst – Leeming was given the chance to kick a penalty from 35 metres and restore the 7-point cushion.

A useful half-time lead was cut when Hartpury were penalised in fielding the re-start and Waters did the rest.  10-6 at the break.

The second half started much the same as the first, with neither team able to establish a clear advantage, although Waters did bring his team to within a point in the 47th minute with another well-struck kick.

Hartpury quickly brought ‘big guns’ Mikalcius and Craig off the bench and the Lithuanian winger was quick to challenge the Loughborough defence.  However, it was lock forward Craig who made the next contribution to the score-line and it came after the hosts had enjoyed one of their best attacking spells of the match.

Hartpury are not short of strong ball carriers and Rob Fuller, Alfie Barron and Luke Stratford all showed up well as they went through the phases.  Skipper Negri and scrum-half Randall were the glue that held it all together, while Jamie Forrester was a constant threat in the midfield.

The try, when it came midway through the second half, was reward for patience and control as phase after phase came to an end when Craig drove over powerfully from Randall’s popped pass.  Again Leeming added the extras and the lead was back out to eight points.

The closing stages were tense.  Waters was successful again after Hartpury pulled down a maul and Leeming kept home hearts fluttering when he pushed a penalty just wide with five to go.

But Hartpury, continuing to control the ball well, held on and a late Loughborough rally ended when the ball was knocked on in midfield, not for the first time on the night, bringing the final whistle.

Winning coach, Sean Lynn, was understandably pleased with his side’s performance. “We knew that it was important to cut out the mistakes and tonight, apart from on a very few occasions, we did that.  The front five were immense and we defended superbly across the team.”

Skipper Seb Negri was equally happy.  “This has got to be the best day of my time at Hartpury, so far” he said.  “We knew this was going to be a tough match and I’m just so proud of the way the lads performed.  We’ll take this title and enjoy it tonight, but the important thing now is to go on and make the Twickenham final.” 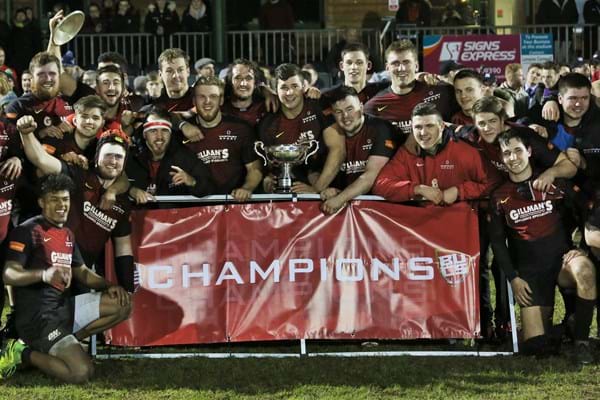