Playing at Kingsholm for the first time this season, the Gloucester-Hartpury Women’s side defeated Worcester Ladies IIs by 71 points to 12 last Saturday to guarantee topping Women's Championship Midlands Two.

Winning the game would technically secure the title and promotion to the Championship. However, the team came into the game on a high, buoyed by the news that team would be playing in Women’s Super Rugby next season.

But proceedings started on a sad note as there was an impeccably observed minute’s silence in memory of Elli Norkett, the young Welsh player, who tragically passed away in a car accident the week before.

When the game kicked off, Gloucester-Hartpury got off to a flyer. Leah Carey set the tone with a powerful ball carry and, when the ball was moved right, Beth Jones swatted aside two would be tacklers to spring home from 35 metres out. Chloe Limbrick converted.

It was then the turn of the forwards. From a five metre scrum, the front five got the nudge on and gave Leah Carey the perfect platform to pick up and drive her way over past two defenders. Limbrick added the extras again.

Next on the scoresheet was Annouska Gregovich who finished well after a weaving run from Mary-Ann Gittings split the Worcester defence wide open as Gloucester-Hartpury took full control.

However, the visitors still had some fight in them, and opened their account with an interception try from Sarah Davey from inside her own half.

It was a brief respite as another five metre scrum gave Gloucester-Hartpury an A1 attacking position. This time Gregovich turned provider and put Gittings over in the corner after a well-worked wrap-around move.

Susie Appleby’s side kept up the pace and prop Kathryn Buggy was next to cross, diving over from close range after Chloe Limbrick had been stopped just short, and there was still time for one more try before half-time when Beth Jones powered her way over for her second.

The result was pretty much in the bag at half time but Gloucester-Hartpury, seeking to maintain an unbeaten record, were determined to finish in style and a powerful scrum effort drove Worcester off their own ball and gave Leah Carey a clear run to the line.

Centre Lauren Graham got into the act as she broke a couple of tried looking tackles to touch down near the posts before Gittings produced another mazy run before diving over. Replacement Bethany Hicks also touched down as Gloucester-Hartpury turned the screw.

Credit to Worcester, despite trailing heavily, they struck next with a close range try from Lizzie Binks after Gemma Sharples was yellow-carded, but normal service was resumed when Chloe Elliott latched on to a loose ball, hacked downfield and controlled to score.

Chloe Limbrick had been in fine form throughout, both with ball in hand and off the kicking tee, and completed the scoring as she spun out of a tackle to score, before converting her own try to make it eight conversions on the day. 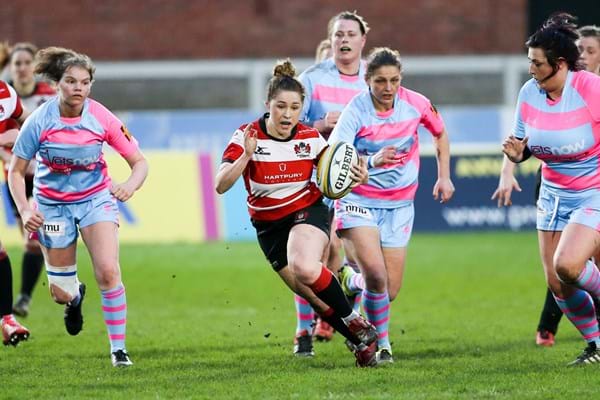