Hartpury won a cliff-hanger last night to take their place in the BUCS Super Rugby Championship final at Twickenham.  It will be Hartpury’s seventh BUCS visit to ‘HQ’ in the past 13 seasons and they will be defending a proud record of not having lost there since defeat in their first final, back in 2005.

They had to battle all the way against a Bath team who were the better side for long stretches of this nerve-wracking encounter.

Hartpury’s win was largely down to a 20-minute purple patch in the second half, when they finally strung together good phases of possession and managed to create space for their talented back line.

Hartpury were again without Under-20 internationals Harry Randall (England), Alex Craig (Scotland) and the injured Harry Agnew, but otherwise able to pick from a strong squad.  Bath were showing four changes, in the starting fifteen, from the side that won at Durham in the quarter-final.

Conditions were close to perfect, as a sunny early evening gave way to a cool, dry night with firm footing.

The opening quarter was a scoreless and largely dour affair with both sides testing the defence of the other and a fair amount of somewhat aimless kicking.

One area where the home side did establish an early edge was at the scrum and, in the ninth minute, this produced a kickable penalty, around 35 metres from the Bath posts.  Sam Leeming struck it well, but it bounced back off the right hand upright and the scoreboard remained static.

Bath were now seeing more of the ball and it was slightly against the run of play when Hartpury took the lead early in the second quarter.  James Forrester was up quickly to charge down another kick ahead from the visitors and quick to the bouncing ball to shoe it ahead.

His fellow centre, Jamie Cooke, was first to get hands on it, 15 metres from the try line and, although he was quickly shut down by the Bath cover, his inside ball was good enough to put Leeming clear and over to score.  Leeming also added the conversion.

Hartpury continued to splutter, however, and Bath were enjoying the better of proceedings. While the home team continued to edge the set piece, Bath were working well in the loose and they got their reward eight minutes later when the impressive Tom Kynge finished a series of powerful drives, leaving scrum half Will Flinn with a simple conversion.

Shortly before the break, Bath produced a mighty heave of their own to win a scrum penalty and Flinn had them 7-10 ahead at the interval.

The isolated Stratford was penalised for holding on and Bath kicked deep into the home 22.  From the line out, the livewire Bath flanker Adam McCarthy was able to spin away and evade a number of tackles on his way to the line.  Again, Flinn added the extras.

This seemed to rouse the Hartpury team, who finally started to produce the kind of rugby we know they are capable of.

Suddenly the forwards started to make ground in the loose and this, in turn, created more space for the men outside.  Stretching the play, they eventually got outside the Bath defence when a long pass from flanker Callum Bowden was perfect for Maliq Holden, who had come right across from his opposite wing, to score.

Leeming landed an excellent touchline conversion and Hartpury tails were up.  With the fresh legs of Tom Pashley and Morgan Morris in the back row, they started to dominate.

Some remarkable goal-line defence from the visitors seemed to have denied them in the 56th minute but when the ball went smartly to the narrow side from an attacking scrum, powerful winger Jonas Mikalcius put Hartpury back in front.

Bath were fading, it seemed.  More pressure followed and it was no great surprise when a yellow card saw Jack Davies leave the field.  With the Bath pack deprived of a powerful scrummager, Hartpury elected to use the penalty as a set-piece and, when the Bath unit dissolved, the referee went under the posts to signal a penalty try.

26-17, and with the comeback seemingly complete it seemed as though Hartpury would pull away.

But Bath had other ideas and they finished the game as the stronger side. Flinn landed another straightforward penalty with eight minutes to go and the big finish was on.

Hartpury, themselves reduced to 14, had to produce some frantic defending in the closing moments, as Bath drove closer and closer to their line and, at the final whistle, were a relieved but happy side.

Hartpury Head Coach, Sean Lynn said “Bath certainly took it to us in the first half when we really didn’t show up”.

“In the second half we knew we needed to show a bit more energy, have a bit more about us and keep the ball in hand.  In the first half we didn’t do that, but I was pleased with the character we showed at the end.”

Winning skipper Sebastian Negri had similar thoughts.  “We don’t make it easy for ourselves do we?” he said.

“We showed a lot of character, as we have done all year, but we know we have to step up our performance levels for Twickenham.  We made too many errors in the first half, trying to force off-loads, but we re-gathered ourselves after the break.  Twickenham has been our goal all season, and we’re there now.” 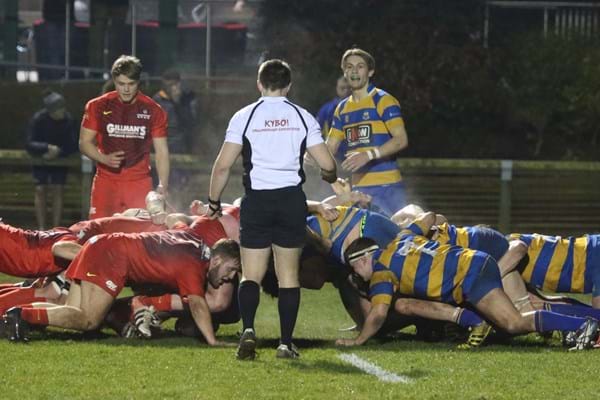