Hartpury outscored their opponents, reigning Champions Exeter University, by four tries to three, justifying their narrow 27-24 victory, but that only begins to tell the tale of a pulsating match.

Having already secured the inaugural BUCS Super Rugby trophy earlier in the year, Hartpury had been less than convincing in the subsequent knockout fixtures, only grit and determination getting them past both Leeds Beckett and Bath.

Yesterday, they showed still more of that character, but at last managed to combine it with some of the quality play that we know them to be capable of.

Exeter, as befits champions, were never less than dangerous and for the first half hour, despite some enterprising play from the Red & Blacks, appeared to be in control of proceedings.

An early try from scrum half Aaron Bagwell, after some excellent off-loading had opened up the Hartpury defence, had Exeter ahead and when their forwards rumbled over from a an attacking lineout in the 24th minute, Matt Eliet getting the final touch, it looked as though they might run away with it.

Between those scores, Sam Leeming had put Hartpury on the board with a well-struck penalty and he was having a good first half, kicking confidently from hand and getting his three-quarters moving whenever the opportunity arose.

He almost made a breakthrough shortly before half-time when he collected his chip ahead, but was denied by a last ditch tackle.  However, Hartpury – prompted by dynamic scrum half Harry Randall – were not to be denied and a try almost on the whistle, when good hands put full-back Maliq Holden in at the corner, came at a critical time.

Hartpury has their tails up going into the second half but they were temporarily on the back foot after seven minutes as Exeter piled forward.  Try-scorer Holden was shown a yellow card for slowing the ball down in front of his own posts and, from the kick, Exeter were able to stretch the lead once more.

But the tide had turned and Hartpury were to dominate for the next thirty minutes as the holders started to feel the pace of the game.

With 50 minutes showing and 14 men on the pitch, Hartpury were back to all square.  After a searing break from centre and vice-captain Jamie Forrester at the heart of the Exeter defence, his well-timed pass meant that no-one was going to stop Jonas Mikalcius.

Sensing blood, Hartpury stepped into an even higher gear.  Despite a penalty pulled wide by Leeming and the loss of inspirational skipper Seb Negri after a heavy collision in midfield, it was the challengers who were now asking all of the questions.

With the set piece starting to enjoy a clear advantage there was no shortage of possession but Exeter were defending resolutely.  It was going to take a moment of individual brilliance to make the difference and it came from Randall.

After defending desperately over a series of phases Exeter were on the back foot.  A penalty at the maul was all the encouragement the England Under-20 man needed as his quick tap and go caught the men in green and white on their heels.  Pace and footwork did the rest and the celebrations were mighty.

Randall was in again with nine minutes to go when, sniping on the heels of his now rampant pack, he was able to dart over from close range.  Both conversions went astray, but Hartpury had the al-important 10-point lead.

Exeter, to their credit, roused themselves for a final challenge and when they scored through Callum Roberts with three to go it was hearts-in-mouths time for Hartpury.  But the Devon side were then penalised in the dying seconds and a kick to touch, followed by an ice-cool throw from Lewis Grinsell to the line-out, was all that was needed to close the game out, as Randall joyously booted the ball into touch.

The scenes at the final were, as always, euphoric.  For many players this will have been their final action in a Hartpury jersey and for the coaches and back-room staff it ended three years of frustration since the College’s last Twickenham triumph, back in 2014.

Congratulations to the players, coaches and all of the support staff for yet another exceptional season of Student rugby at Hartpury. 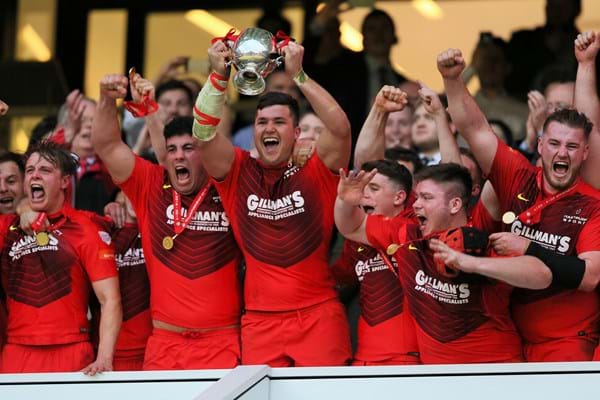