Hartpury go into tomorrow’s BUCS Super Rugby Championship quarter-final against Leeds Beckett, hoping that a bumper home crowd will cheer them to victory.

Director of Rugby, John Barnes, has no doubt that the atmosphere generated by vocal support has a big impact on the players.

“Evening games, under floodlights and with a good crowd, are always a big motivator for the lads.  We’re hoping that people will turn out in good numbers and that we can give them something to celebrate.”

The atmosphere in the final league game, against Loughborough, was excellent, even though the campus was largely empty due to reading week.  With all the College back, the BUCS league winners will be hoping for something even better tomorrow.

Not that anything is taken for granted regarding the game itself.  Despite two league wins over Beckett, Barnes is well aware of the threat that they can pose.

“They are a decent side – I know that they struggled in the BUCS Super Rugby league table, but most of their games were close.  We were lucky to win our home game against them – they came here and played really well.

They have a very good pack.  Good scrum, good set-piece.  They had a very convincing win against Bristol last week, who had done well in the division below, so they will come here with some confidence.

They have nothing to lose, playing against the league leaders, so they will be looking to have a go and knock us out.

Our boys have trained well in the last week and they’ll be ready for it.  But it will be tough game – quarters and semis always are.”

Hartpury squeezed home when Leeds Beckett visited in November (pictured), falling 5-20 behind at one point in a lacklustre first period, before a much stronger effort after the break eventually produced a 30-23 scoreline.

There was a more emphatic 27-7 victory in Yorkshire, early in the New Year, but again not before Beckett had taken a first half lead.

Tomorrow’s match kicks off at 6.30pm.  As usual at BUCS home fixtures, you can get a pint of Fosters for £2 if you are wearing Red or Black (and over 18, of course). 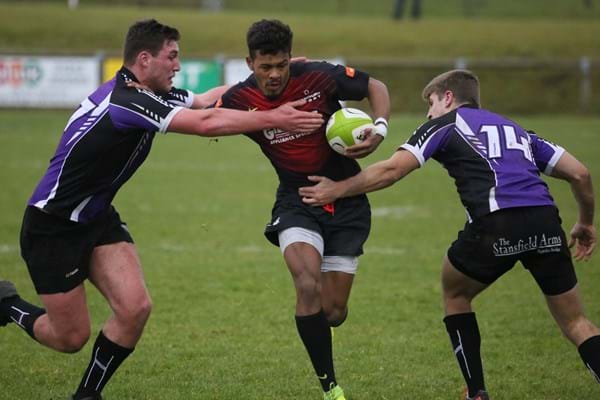