Hartpury’s university rugby side left it late as a last gasp converted try saw them come from behind against a spirited Leeds Beckett team in the British Universities and Colleges (BUCS) Rugby Championship quarter-final.

The inaugural BUCS Super Rugby league winners required a 79th minute try, converted nervlessly by Lewis Dennett, to come from 14-19 down to win 21-19 and advance to the semi-final stage of the competition.

Sean Lynn’s side found themselves 11 points up at half time as Sam Leeming kicked two penalties and Luke Stratford bundled over from a lineout but they were quickly pegged back as a spirited Leeds side – reduced to 14 – clawed their way back into the game in the second half through three unanswered tries.

The away side had missed a penalty shortly after the break and soon found themselves a man down for tackling a Hartpury player in the air. But the reduction seemed to kick them into life as they scored their opening try of the evening quickly afterwards. The kick was missed to leave the score at 11-5.

Leeds then looked to have scored a second but in the midst of celebrating the referee had already called play back for an infringement. Despite this, they were soon two scores ahead after back-to-back penalty tries in the space of four minutes were awarded by the referee, with both easily converted in front of the posts.

Finding themselves 11-19 down the home side responded with a good period of possession that resulted in Lewis Dennett slotting a penalty to reduce the arrears to five points heading into the final five minutes.

The shock of the penalty tries, much like Leeds being reduced to 14 had done, seemed to kick Hartpury back into gear and as they stepped up their pace. A well-placed penalty kick to touch in the final minute gave them one last chance. Skipper Negri claimed the ball from the lineout before the forwards drove on and bundled over to tie the scores at 19-19.

With the crowd deadly silent, Dennett, who had earlier kicked Hartpury’s penalty to get them on the board in the second half, duly dispatched the conversion from out wide on the right to spark scenes of celebration from the home support.

From the resulting kick-off, Hartpury quickly recycled the ball and kicked it out of play to secure the win and advance to the semi-finals next week.

“Fair play to the boys; we showed a lot of heart, a lot of character to bounce back. It was hard out there, we knew that Leeds were going to come and be physical and that they had a good set piece,” skipper Seb Negri said.

“We got out of jail last night. We know that we weren’t good enough and we have a lot to work on for next week. We have to bounce back as a team though. We will put the wrongs right and we’ll come back fighting next week because we know it’s going to be even tougher. For now we’ll take the win and move on and be happy that we’re in the semi-final.”

Hartpury will now face Bath at home next Tuesday evening, for a place in the final at Twickenham where they will come up against the winners of Loughborough vs Exeter if they make it through. 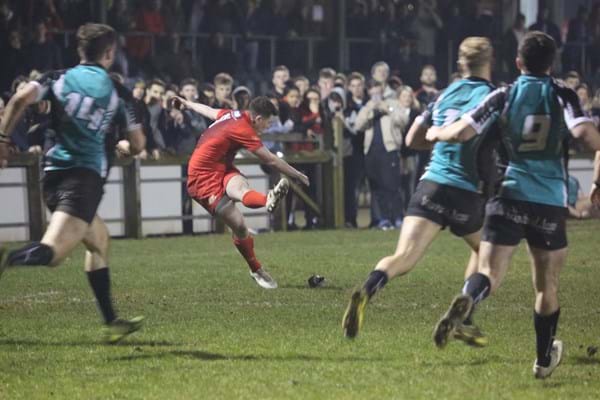