History boys Hartpury made it 30 not out at Blackheath as they became the first National One team ever to complete an unbeaten season at this level.

This remarkable achievement saw them rack up an outstanding 28 bonus points in their 30 straight victories, accumulating the most points ever scored in a National League One campaign, including the most ever four-try bonus points and league points, as they comfortably clinched a spot in the Championship next season.

And there were individual honours too as winger Jonas Mikalcius added a hat-trick to his try tally for the season to finish as the league’s top try scorer with 36.

Blackheath actually started out on the front foot, attacking from a penalty line-out after the visitors were pinged for holding on, recycling the ball through a series of rucks, but it was all a little pedestrian and good disruptive work by fly-half Adam Hastings eventually forced a knock-on.

They soon launched a fresh wave though and almost worked an overlap for hot-stepping winger Tom Chapman to dance over but it was a penalty slotted by fly-half Mark Cooke that eventually rewarded the pressure.

A cruel blow swiftly followed though as winger Jonas Mikalcius used his superior stature to claim the restart and handed off the last man to canter in at the corner. Fly-half Adam Hastings converted for 7-3 on 12 minutes.

The visitors’ pack were now turning the screw, driving Blackheath back at a rate of knots at the maul before getting a solid push on at the scrum.

The ball was moved effortlessly through the backs before full-back Maliq Holden set the ruck; scrum-half Charlie Chapman then unleashing quick ball to Hastings, who glided through, handed off and put boot to a beautifully weighted kick ahead for Mikalcius to collect and complete his double.

The extras missed but Hartpury were 12-3 to the good at the close of the first quarter and when the hosts coughed up possession in midfield, Hastings was at the heart again as Mikalcius completed his hat-trick on 28 minutes with the number ten’s pass timed to perfection to the Harlequins’ man, who used his power and pace to swerve in at the corner. Hastings’ conversion made it 19-3.

A training ground move cut the deficit five minutes later though as number eight Tom Baldwin barrelled over from a well worked set play at the line-out. Cooke’s conversion made it 19-10.

With the pack laying the platform, centre Luke Eves wrapped up the bonus point with a converted try before half-time but some seriously sloppy defending put Blackheath right back in it before the break as they all too easily rumbled a drive over with flanker Chris Walker securing the score. Cooke converted for 26-17.

Hartpury looked determined to step it up a gear as the second half got underway and they fired an early salvo when centre Steve Leonard, flanker Jake Polledri and Holden combined to create an overlap for winger Harry Cochrane, who outpaced the last man and further flummoxed him with a step to go over. The extras missed.

Blackheath rallied for a spell, with their front eight starting to make more of a nuisance of themselves and the half-back pairing looking sharp, but a poor throw at a penalty line-out cost them a solid attacking platform on the 22.

Snaffling back possession at a Hartpury line-out as the visitors punted a penalty into the corner minutes later, Blackheath were then thwarted by a knock on, but they were awarded the penalty at Hartpury’s scrum as their step up in aggression continued to pay dividends.

They were undone though when Cochrane, now moved into scrum-half, took a quick penalty and fed number eight Seb Negri, who ploughed through and set up good ruck ball. Cochrane plucked it out to feed Hastings, who delayed his pass to put Holden into space to cruise in. The conversion was missed but the visitors looked clear now at 36-17.

A gutsy intervention by the Blackheath winger prevented a certain fourth try for Mikalcius and Hartpury then failed to profit from a series of penalties as they looked to capitalise on a series of scrums on the 22.

After another golden opportunity from a penalty line-out was fluffed though, Holden fumbled to deny a score at the corner and then a thunderous tackle saw Leonard lose the ball with the line begging.

With Blackheath skipper and centre, Markus Burcham, in the sinbin, the league winners finally made the breakthrough on 75 minutes after rumbling a scrum to the shadow of the line before replacement Morris Morgan fed Cochrane to dart over in the corner. Hastings converted for 43-17.

Gutsy Blackheath dug deep in the dying minutes and got the try their efforts deserved as Cooke lofted a ball over the top for winger Mike Mvelase to collect and dive over for an unconverted score.

That cut the final gap to 43-22 but nothing could take the shine off a super season for John Barnes’ men. 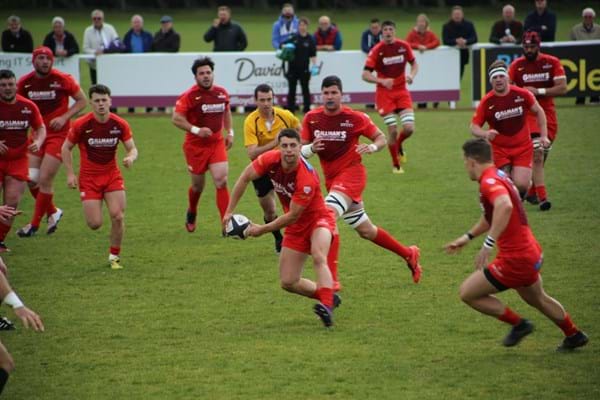