Renowned as the toughest three day event in the world, this year’s Badminton was no exception with local riders making the most of Hartpury facilities in their preparation.

Local rider Jonty Evans, based near Cheltenham, finished in the top twenty from 82 starters. After a career best dressage score in the first phase of the competition he went into the second phase in third place.

The cross country, designed by Eric Winter, certainly proved challenging and very influential, living up to the tough Badminton legacy. With 16 combinations eliminated in this phase and a further 16 choosing to retire only two riders came home clear and inside the time.

Evans picked up an unlucky 20 penalties with a run out at fence 21 plus 21.2 time penalties to add to his dressage score of 37.2. Not deterred the Irish rider climbed back up the leader board in the final showjumping phase, completing a clear round inside the time, one of only twelve to do so of the 46 to complete the competition.

In his competition preparation Jonty worked closely with the team in The Margaret Giffen Centre for Rider Performance and Equine Therapy Centre at Hartpury, using the facilities alongside treatment from osteopath Liz Launder Evans to ensure he was in peak fitness.

Jonty’s horse, the 11 year old Irish gelding Cooley Rorkes Drift, has been a regular at the centre since 2015; and used the water treadmill as part of the preparation for both the Rio Olympics 2016 (where the pair were ninth individually) and for Badminton.

Of his success at Badminton Jonty said: “His is my horse of a lifetime and I wanted to do everything possible in the preparation for Badminton. I couldn’t believe the scores and marks we received in the dressage. I made a mistake in the cross country and I can’t blame the horse at all. In all I’m very pleased with him and our performance.”

Hartpury graduate Astier Nicolas, riding his Olympic horse Piaf De B’Neville, also had a good competition finishing fifteenth. Sitting in tenth after the dressage the pair had a few sticky moments cross country but managed to jump clear, just adding 19.2 time penalties, before completing on a final score of 69.70 after two fences down in the final phase.

Winter’s first time designing Badminton’s cross country course certainly divided the field and it will be interesting to see what new elements he brings to the NAF International Hartpury Horse Trials in August this year! 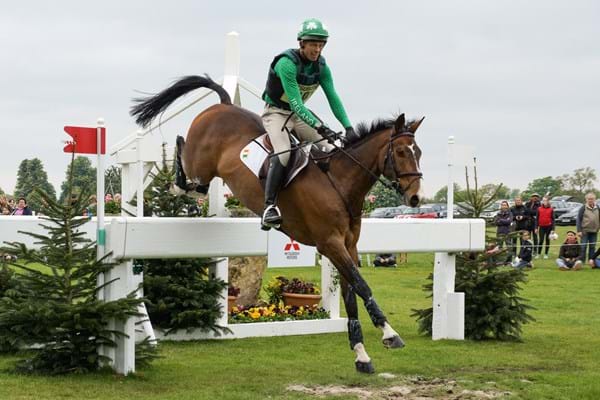