Four agriculture students from Hartpury have taken on a crop growing challenge with a twist as they compete against teams from universities and colleges across the country.

Hartpury’s team are competing in the eighth annual Cereals Challenge for the first time in several years. The crop-growing competition has made a fundamental change this year as contestants will be nurturing a virtual crop rather than heading to the fields. Thus geographical location is no longer a barrier to teams tending their crop.

Our budding agronomists have assumed full responsibility for their spring barley and are managing the virtual crop in real-time. This means responding to challenges such as drought as well as carefully choosing inputs based on their crop variety and the environment it is growing in.

Alexandra Growden, a second year Agriculture Foundation degree student, said: “As a team we must provide fertiliser and herbicide management plans, a plant growth regulator and pest and disease management plans. As well as this we have to give written justification of our decisions throughout the process.”

“We’re a mixed team of both College and University Centre students and were selected by our lecturers due to our particular interest in crop production and management. It’s been a really enjoyable process, especially working together and pooling our knowledge to make key decisions at each stage of the competition. We’ve also been working closely with lecturer Patrick Tandy who has been a great help throughout!”

Seven other universities and colleges are taking part in the competition, jointly organised by crop production specialists Hutchinsons and farm business management company Velcourt, which aims to inspire future farmers and agronomists.

The teams have already submitted several plans, including disease management and a fungicide programme, and the competition is reaching its closing stages. The winning team will be announced at the Cereals event on 14th June as part of the Guild of Agricultural Journalists Cereals Awards ceremony. 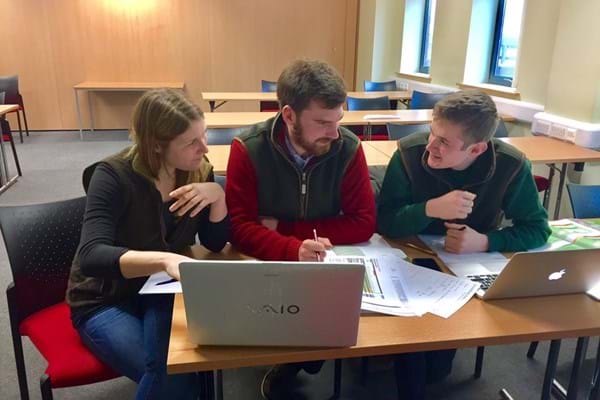