Hartpury’s rowers cruised to a course record time as they picked up their fifth consecutive title at Henley Women’s Regatta with the college’s junior quad powering to victory in the Bea Langridge Trophy.

The quad comfortably beat Cambridge in the final to secure the national title that the college has won previously in 2013 and 2014, a result that sees Gloucester-Hartpury’s junior crews unbeaten at over the last five years at the event.

The regatta has been a fruitful one for Gloucester-Hartpury crews with titles having also been picked up in the senior quad sculls in 2015 as well as last year’s success in the junior girls coxed four.

The Gloucester-Hartpury crew qualified from the time trial on the Saturday before going on to beat Emmanuel School in the first round. They then reversed a recent defeat to Latymer School in the National Schools by beating the London crew in Sunday’s quarter-finals.

The semi-final saw the girls set their first course record of the day, beating a travelling crew from Australia – Sydney Rowing Club. Cambridge’s Isle of Ely then went on to match the girl’s course record as they beat pre-event favourites Henley in the other semi-final.

Despite the equal times in the semis, the final was a more one sided affair as Hartpury comfortably powered to victory and set another new course record in the process.

Hartpury’s Rowing Manager Tom Pattichis said “This was a great performance by the girls, it was a big improvement on the National Schools result and it was nice for them to show what they’re capable of by setting a really fast time. They rowed really well all weekend and it’s a credit to Will King who coached the crew. The weekend has been really good preparation for Henley Regatta this weekend.”

Hartpury’s Bryony Lawrence was also racing at the event but was unfortunate to come up against eventual regatta winner and pre-favourite, Laura Merridew, in the last 16 having qualified from the time trial stage.

Away from the Women’s Regatta, a Gloucester-Hartpury boys crew took part in the Marlow Regatta at Eton Dorney, finishing fourth. The crew of Diploma Sport Students Isaac Herring, Jacob James and Alfie Heath alongside A Level student James Cartwright made progress from their seventh place finish at National Schools.

Attention for both crews now moves to Henley Royal Regatta next weekend with the boys and girls crews having achieved pre-qualification together for the first time since 2014. 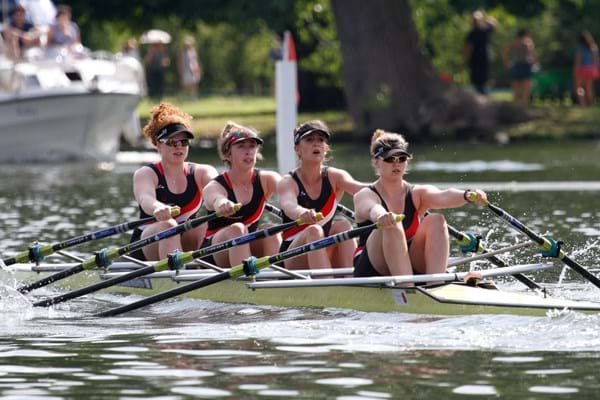