Two future Gloucester-Hartpury Women’s players will be hoping to help England to back-to-back World Cup titles after being named in the Red Roses squad for this year’s competition.

Zoe Aldcroft and Sarah Bern, both students at University Centre Hartpury, will be part of Simon Middleton’s squad when the World Cup gets underway in Ireland this August. The pair are returning to Hartpury in September to continue their studies and will play for the BUCS side as well as Gloucester-Hartpury Women.

The pair, who both have both been capped at senior level already, will both experience the World Cup as players for the first time. Bern has featured for England in the Six Nations as part of the squad that won the Grand Slam and also toured New Zealand recently.

The prop forward, 19, originally from Kingston-upon-Thames, re-joins Gloucester-Hartpury this season after impressing during the last campaign with fellow Women’s Premier 15s side, Bristol Ladies. She is currently studying for a degree in Sports Coaching.

20-year-old Aldcroft, meanwhile, will also be vying to make her debut in the World Cup after having been included in the squad. The Sport and Exercise Nurtition student is a relatively new figure in the senior set-up, but impressed on debut scoring in the final four minutes against France at Salt Lake City in July 2016, scoring the try that clinched a 17-13 win.

Hartpury’s Director of Elite Sport, Tom Radcliffe, said: “It’s great to see Sarah and Zoe involved in the latest England Women’s squad aiming to retain their World Cup title. At Hartpury we have a strong affiliation with the women’s side having seen a number of our current players and graduates go on to represent England at the highest levels.

“Some of our graduates already have World Cup titles to their names and it would be great to see two more Hartpury girls add that honour.”

“It’s terrific to see Sarah and Zoe named in the squad and for Gloucester-Hartpury to have representation in the squad. Under Susie Appleby’s leadership, the team have come a long way in three seasons, and the step up to Women’s Premier 15s will be a big one.

“Being able to attract more international calibre talent to the Gloucester-Hartpury squad is important and, while we wish Sarah and Zoe all the best on World Cup duty, we’re looking forward to seeing them in Cherry and White next season.”

2014 World Cup winners Natasha Hunt and Alex Matthews are also named while Amy Cockayne and Megan Jones are former students included as part of the squad that will travel to Ireland in August.

Away from the Red Roses, the Wales squad for the World Cup is yet to be announced but Gloucester-Hartpury are hoping to have a number of players named when it’s announced in July.

They could also have an Italian representative with Bianca Coltellini in her country’s training squad ahead of the competition. 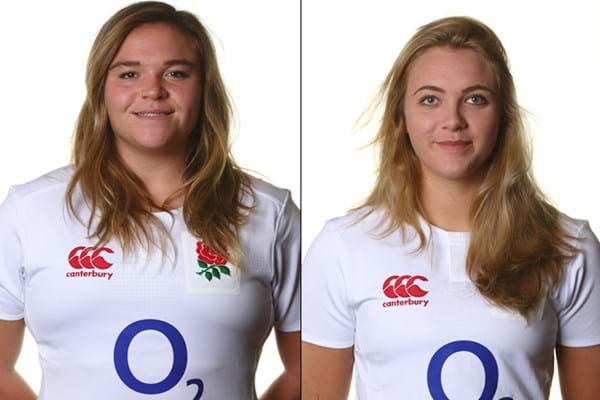