Hartpury’s rowers had to survive a semi-final photo-finish scare before racing to victory at Henley Royal Regatta as they claimed their fourth straight title at the event.

A Levels students Hannah Cooper and Zoe Adamson alongside diploma students Holly Huggins and Georgia Martin rowed to a two length victory over Cambridge’s Isle of Ely Rowing Club in the final of the Diamond Jubilee Challenge Cup.

The Hartpury students, racing for the college’s host club, Gloucester Rowing Club, had earlier survived a scare after coming from behind in the semi-finals against pre-event favourites and top seeds Headington School. Having been behind for most of the race the girls, coached by Will King, overtook their rivals in the remaining few metres to edge a photo finish and seal a place in the final.

Previously the crew had beaten long-time rivals Marlow Rowing Club in the last 16 before making their way past Henley Rowing Club’s B crew at the quarter final stage. The final, which was a repeat of the recent Henley Women’s Regatta, once again saw Gloucester Hartpury prevail against Isle of Ely.

Away from the girl’s action, the boys, coached by Ben Jackson, posted their best-ever finish at the event as they made it to the quarter finals. Having beaten Warrington Rowing Club and seeded USA crew, Malvern Prep School, the boys – Isaac Herring, Jacob James, James Cartwright and Alfie Heath – lost out to eventual regatta winners Windsor Boys School in the last eight. This was the first time since 2014 that the boys’ crew had pre-qualified for the event alongside the girls’ crew.

Hartpury’s Rowing Coach, Tom Pattichis, said: “This is a great result for us and it’s brilliant to win here for a fourth year in a row. Credit has to go to the girls after pulling through that semi-final; they fully deserved to come home with the title.

“Our girls crews have always enjoyed racing at Henley and it’s great this year to see our boys achieving their best-ever result. They’ve been working really hard and the results are starting to show.”

The squads will now turn their attention towards the British Rowing Junior Championships while Heath and Adamson will be looking to gain places in one of Great Britain’s 2017 junior teams. 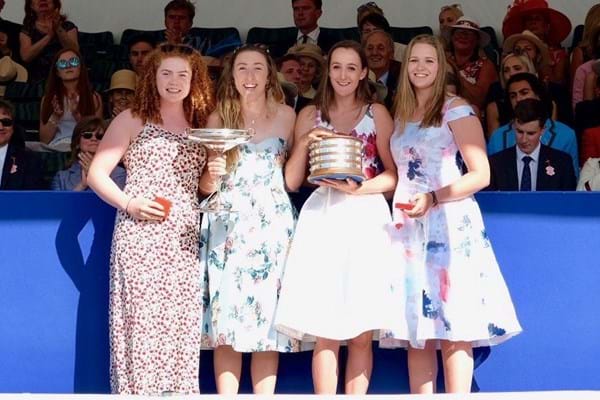