Hartpury’s rowers followed up their Henley triumph by winning the girls under-18 event at the British Rowing Junior Championships this weekend.

The result sees the quad, coached by Ben Jackson, qualify for the Home International Regatta this coming weekend where they will represent England.

It’s the fourth time in five seasons that a Hartpury crew has won the event. This year’s team consisted of Georgia Martin, Hannah Cooper and Holly Huggins – who were all part of the winning Henley crew – alongside Hettie Bawden, replacing Zoe Adamson who was involved in the GB junior team selections.

Hartpury also completed another rowing first for the college as they raced in at eight at a national regatta for the first time, winning bronze in the process.

Hartpury’s Rowing Coach, Tom Pattichis, said: “This was a great weekend for us, both with boys and the girls. To row in an eight for the first time at a national event and come away with bronze is a great achievement and a testament to how much the boys side of the programme has developed over the last year or so – they’ve had a really great season. 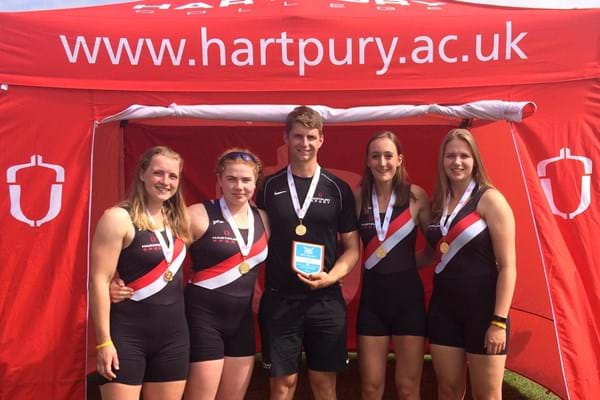