The 18-year-old A Level student claimed gold alongside teammate Holly Dunford in Lithuania. They held off the late challenge from a German crew at the World Rowing Junior Championships.

The duo were third at the halfway stage but moved ahead in the final third before holding on to claim gold.

It was the third time Zoe has represented Great Britain this year. She placed fifth at the European Junior Championships and raced at the Munich International Regatta.

The result completes a successful season for Adamson. She took silver at the National Schools Regatta as well as helping Hartpury to a fourth successive Henley Royal Regatta win. The junior rower also won Henley Women’s Regatta as part of the same quad.

Tom Pattichis, Zoe’s coach at Hartpury, said: “Zoe's had a great season and becoming the college’s first-ever junior world champion is a big achievement. She and Holly paced themselves well and it was a well-deserved victory.

“The rowing programme has only been running for just over seven years and it wasn’t that long ago we were celebrating our first Great Britain team selection. Now we have a junior world champion. It’s a testament to the hard work that has put in, not just by Zoe but by everyone involved with the programme.”

With Zoe away competing for Great Britain, her Hartpury teammates continued their good form this season as they won the Home International Regatta. The quad of Georgia Martin, Holly Huggins, Hannah Cooper and Hettie Bawden, representing England, beat Ireland into second place at the event at Strathclyde Country Park, Scotland.

The crew were representing England as a result of winning the British Junior Championships. It’s the fourth time in the last five years a Hartpury crew has represented England.

Tom Pattichis said: “It’s great to win the Home International Regatta again, it’s been a great event for us over the years. The girl’s quad have performed strongly all season and it was good for them to finish the year with another win.” 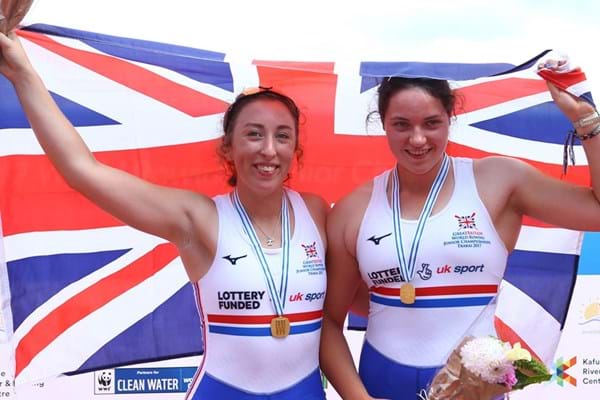