Second Year Extended Diploma students from the Animal Management programme at Hartpury ran the ‘I’m a celebrity, get me out of here’-style fundraising event in benefit of the Gloucestershire Young Carers group.

The event, which also had a Halloween-theme, saw three teams compete in four events, with one including Hartpury Principal, Russell Marchant and another with Gloucester Rugby player Henry Walker.

Teams put forward one member per event without the knowledge of what the next challenge would be. Participants found themselves handling cockroaches, millipedes and skinks while blindfolded as well as tasting some questionable dishes. These included offal milkshake, liver and kidney kebabs, as well as a haggis, mealworm and cricket pizza.

They also took part in handling scorpions, tarantulas and snakes as well as a searching for letters in bowls of slime and mealworms as part of a treasure hunt in a dark room while Hartpury students tried to frighten them.

The event was also part of Global Radio’s Make Some Noise Day and Gloucestershire’s Heart FM were on hand to cover the day at Hartpury. Mark Harper, MP for the Forest of Dean, who was at the college for another event, was also persuaded to handle a snake, a skink and a scorpion.

Grace Watkins, Head of Department for Animal Management at Hartpury, said: “The event was a huge success. It’s something that we’ve been planning for a while and it’s great to see it come to fruition. Our students have been brilliant throughout and everyone had a great time.”

Running the event was a good opportunity for the Hartpury Animal Management students to get some experience of the type of thing that might be expected once they move into the world of work, getting people to overcome their fears and phobias of certain species. 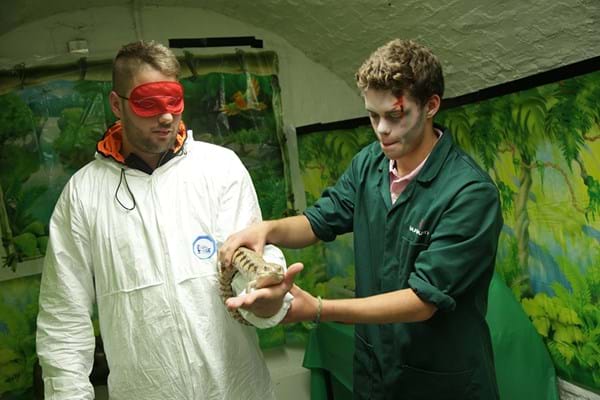