The college continued its run of winning the Junior Team of the Year category as their junior football team picked up the 2017 award. Hartpury women’s rowing quad pipped them to the title last time around. Last season, Paul Tassell’s side became the first school or college side in the country to win the English Schools Hudl U18 Elite Schools and Colleges Cup.

The Senior Team of the Year award also went to Hartpury with the Saturday RFC side, who now play in the Championship, beating Forest Green Rovers and the University of Gloucestershire Women’s Hockey team to the title.

They scooped the award after winning all 30 of their games in National One last season, picking up a record 148 points along the way. They currently sit seventh in the Championship table after seven games.

Sarah Bern, a college graduate who has recently returned to Hartpury University Centre to study a degree, was another winner. The Strength and Conditioning degree student, who also plays for Gloucester-Hartpury Women and England Women, won Senior Sports Player of the Year.

Hartpury’s Director of Elite Sport, Tom Radcliffe, said: “It’s great to see our students recognised for their achievements, both individually and as a team. We pride ourselves on our sporting success and it’s always good to be rewarded for the hard work that our staff and students put in every year.”

Mark Cornwell, Hartpury’s Rugby Academy Head Coach, and graduate Ross Moriarty, who plays for Gloucester Rugby and Wales, were also finalists at the awards. Cornwell was up for Coach of the Year, while Moriarty was one of three nominees for the Professional Sports Personality of the Year award.

Hartpury have a history of success at the awards evening. The college’s rowers picked up the Junior Team of the Year title three years running in between 2014 and 2016. In 2014, three other people with Hartpury ties also picked up awards. 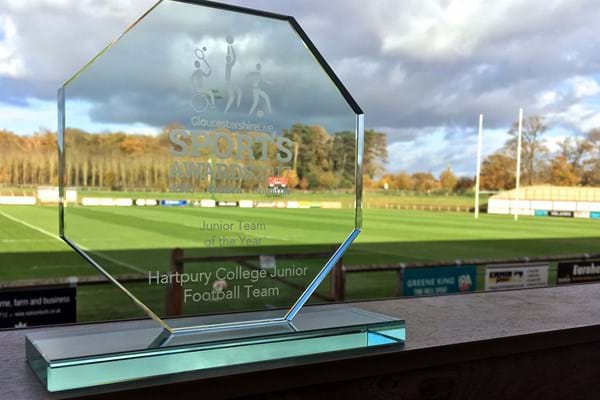