Hartpury student Abbie Summers had a successful end to 2017 after finishing second in her class at the Liverpool International Horse Show.

Abbie said: “I felt really prepared coming into the competition and on the day my horse felt on great form; I couldn’t have asked for more.

Not many full-time students are able to compete at the level Abbie is currently riding out and it’s in part thanks to Hartpury’s Equine Academy. As a member she gets supported in her riding development and Hartpury’s coaches also work closely with her home coaches to ensure the best results.

“Being part of the equine academy has been incredible. I’ve received a lot of support and I’m excited to continue working with the coaches at Hartpury, and hopefully achieving more success,” Abbie added.

Abbie, an Equine Business Management degree student, was also presented with her certificate after graduating from British Showjumping’s Advanced Apprenticeship in Sporting Excellence (AASE). It’s a training and support programme for riders with the potential to excel in their sport alongside a national qualification.

Fellow students, and siblings, Kieran and Michaella Masters also had impressive showings at the event. Michealla, also in the 1.30 Amateur class, finished in 20th aboard her mare, Clintina. It was the pair’s first time jumping in an event of that size. Kieran meanwhile, on a borrowed horse – Duj de la Gubia – finished 27th and 29th in his two events.

The college’s equine academy show jumping coach, Corrine Bracken, was also on hand at the event commentating on the action across the three days. 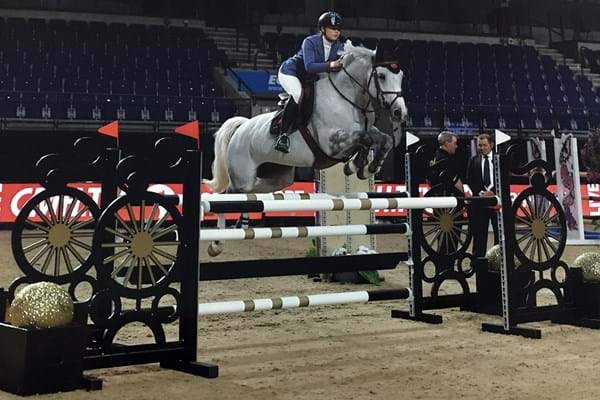