Students at Hartpury College and University Centre Hartpury are helping to get more girls into the fast-paced sport of Futsal.

Over the course of four weeks, they’re delivering coaching sessions and competitive Futsal to more than 80 girls aged 14-16.

It’s the fourth year that Hartpury have been involved in the initiative, which is run in conjunction with the Gloucester County Girls football league.

Hartpury have been involved from the beginning, with students helping to plan and deliver sessions, as well as liaise with parents, coaches and league representatives about the programme.

Luciana Silva, one of Hartpury’s Sport Coaching degree lecturers, said: “Our aim is to introduce girls to the sport of Futsal as well as develop those who have been involved previously.

“It’s also about making sure that the girls are still active during the winter months, as it’s common that their football games will be postponed in January due to poor weather. Futsal is played indoors, allowing the girls to still be actively involved in learning skills that are directly transferable to Football.

“The event also gives our students great experience to apply what they’re learning in the classroom to a real-life event.”

Hartpury graduate Nicky DeBonis was also involved with the coaching. DeBonis is currently the only female football coach in the Southern League, as part of Steve Cleal’s coaching staff at Bishop’s Cleeve FC. She is also currently Women’s & Girls Football Intern at Hartpury, tasked with increasing the amount of women and girls regularly playing football in Gloucestershire. 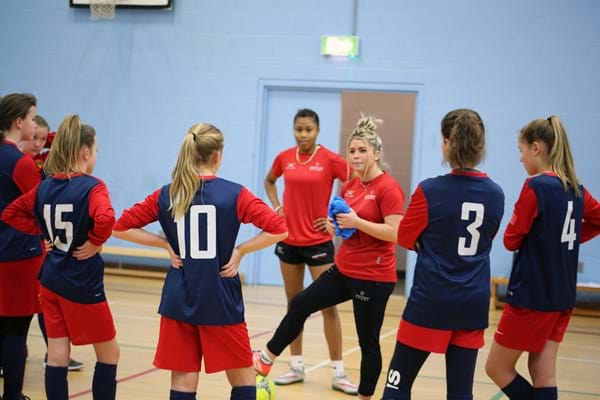