Paralympian Mel Nicholls put a group of Hartpury students through their paces as she gave them a taste of what training at the top is like.

The students involved were all hooked up to brand-new heart rate monitors during the sessions. They showed individual heart rates during the workout as well as what percentage of their maximum heart rate students were working at.

Mel, who has represented Great Britain at the last two Paralympics, took the students through one of her own pre-race warm up routines using the college’s static gym bikes. She worked the students through different phases of the warm up session, working in different heart rate zones. The group finished with a three-minute time trial effort at ‘race pace’ to close the session. Mel explained how she has to keep that same maximal effort for 30-90 minutes as opposed to three minutes, using just her arms.

Mel said: “I’ve really enjoyed working with the students and helping them to understand my training, and what it takes to go for gold. It was also great for me to learn about their studies and aspirations.  I train at this level six days a week, so I’m really impressed with the effort and engagement put in by all the students today.  I’m already looking forward to planning my next sessions with Hartpury.”

During another recent visit to the college, Mel also spoke to over 100 coaching diploma, and sport and exercise diploma students, about the world of disability sport. She brought in her racing wheelchair ‘Dolly’ (mark III), which she used to race for Great Britain at the London 2012 Paralympic games. The theme of Mel’s talks centred her own story and journey into disability sport and an overview of coaching a first time wheelchair racing session.

Aaron Grant was one of the students involved in Mel’s sessions. He’s a single leg amputee studying a sport and exercise science diploma at the college. He said: “It was great to be invited into this session and spend time talking one to one with Mel about her background and experiences, and where she sees herself by the next Olympics. I have taken her details and am looking at my sporting options going forward.”

Mel also recently supported a careers event at Hartpury. As part of a panel, she spoke to final year sports science degree students about applications of sports science as an elite athlete. She also helped to run a college-level workshop focussing on resilience, transferrable skills and preparing for the world of work.

Mel is currently part of the British Cycling team working towards the Tokyo 2020 Paralympic Games in the time trial and road race events. She is in her second year of hand bike, after swapping track wheelchair racing for the cycling sport. She has already achieved international medal success with two bronze medals last year on the World Cup circuit. Mel also became national champion in both time trial and road race.

Mel raced sprint and middle distance on track in athletics from 2011-2016, before making the successful move to endurance and marathon road racing following the Rio Paralympics. 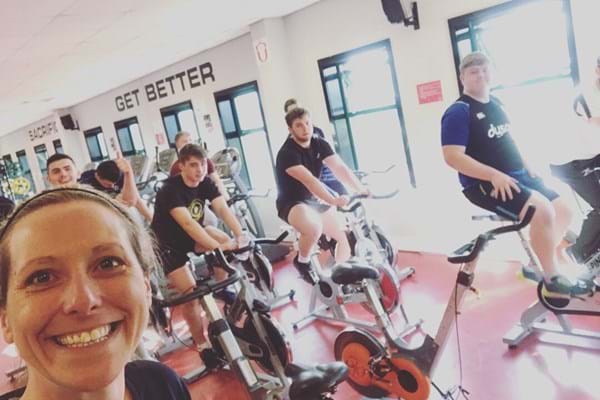