Head coach Sean Lynn hailed the character and composure of his Hartpury players after they won the BUCS Rugby Union Championship men’s final for the second year in a row in dramatic style at Twickenham.

Hartpury desperately needed a try as they trailed Cardiff Met University by four points heading into the closing moments of the nail-biting match.

But roared on strongly by their enthusiastic supporters, Hartpury clinched a stunning 27-24 victory with the decisive score from Luke Stratford converted by Sam Leeming.

“It was a fantastic game and a great advert for student rugby,” said Lynn, whose side led 20-3 at half-time following tries by Alex Forrester and Maliq Holden and two conversions and two penalties from Leeming.

“We just kept composed for that last 10 minutes and, though we didn’t take as many opportunities as we perhaps could have, in the end the boys have shown good character and come away with the win.

“I try and stay as calm as I can on the sidelines, to not let my emotions show to the boys, but deep down I was very nervous in those last five minutes when we needed that try.

“I think I’m getting used to it now, because the whole season has been a bit of a rollercoaster ride.

“We lost our first five games in the league, but our results since show just how strong the programme is in Hartpury rugby.

“They’re a special bunch of players, and from the fourth-year students to the first years, they’ve all bought into what we’re trying to achieve.

“Seven of the boys today were playing BUCS third-team rugby last year, but our motto at Hartpury is ‘develop, nurture and achieve’ and that’s something that we’re really striving for.”

Hartpury just missed out in the women’s final, going down 35-32 to the University of Exeter after extra time.

Head coach Susie Appleby said: “The girls were fantastic and I’m very proud of what they’ve achieved this season.

“Every one of the girls who took to the field today has given everything they could and you can’t ask for any more than that.” 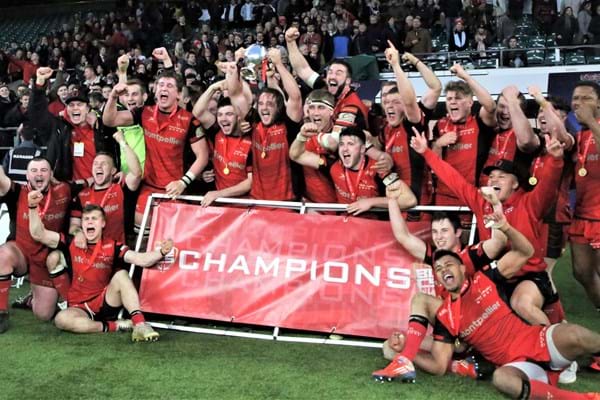