Now, he is set to play in the Football League after winning this season’s Vanarama National League with Macclesfield Town and finishing as the team’s top scorer.

Scott finished the season in grand style by netting both goals in Saturday’s 2-0 victory over Dagenham and Redbridge in Macclesfield’s final game of the season, winning him a place in the official National League Team of the Weekend.

“It’s an amazing feeling to have won the title with Macclesfield,” said Scott, who studied a Sports Business Management degree at Hartpury.

“The fact it wasn’t expected at the start of the season makes it all the sweeter.

“Having spent six years playing non-League, my aim has always been to get back into the League and it’s been brilliant doing it this way, winning the title.

“It’s definitely my biggest achievement to date and it’s something I’m going to cherish.”

Scott explained that the decision to enrol on the Sports Business Management degree at Hartpury had proved a turning point in his football career.

He had started to become disheartened with football after being released as a teenager by Bristol City, but strong support from senior football managers at Hartpury went a long way to rekindling his enthusiasm.

“Hartpury – that’s what made me stick with football when I was going through my worst times,” he said.

“It started in my first year with Steve Guinan and then with Marc Richards over the next three.

“He played a tremendous part in my career, making me stick with it and giving me the confidence to go and achieve what I have done now.

“The guys at Hartpury kept saying ’Play with us and enjoy it again, and you’ll get to where you want to get to,’ and that’s exactly how it’s worked out.”

Picture: Scott Wilson on the ball when playing for Hartpury 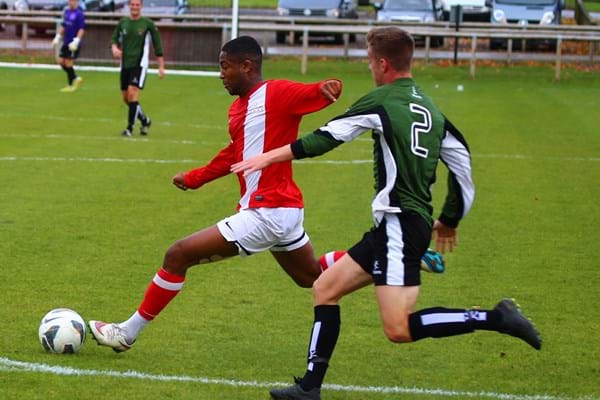