The Newent-based duo performed a lap of honour to Tina Turner’s iconic hit ‘Simply the Best’ in the International Arena after netting the £1,000 first prize following a jump-off that had the crowd on their edge of their seats.

“I have never had a horse that’s jumped as well as him,” said Gregory, formerly based in Cirencester. “He’s an amazingly easy horse to ride – he’s light in the hand and he’s quick off the leg.

“He’s 18 hands and with him you get all the size and scope of an 18-hand horse, but you also get the rideability. He’s amazing.

“The most important thing is that he always tries his best. You can have the most talented horse in the world, but if they don’t try…

“But he gives me everything he’s got all the time and I’m very lucky to have him.

“I don’t think he’s ever been in a prize-giving ceremony because he wasn’t the best young horse, but now he’s eight he’s finally coming good.

“I can’t believe it really, he just gets better and better.

“I love it here at Hartpury, it’s my local show because I live just 15 minutes down the road in Newent – I’ve just bought a place there.

A beaming Nick Edwards was delighted to make a winning return to Hartpury, landing three riding successes over the three days.

“The courses have been lovely here all weekend,” he said. “We competed at this event last year and it was brilliant, so as soon as the weekend ended it was in my calendar right away to come again this year.” 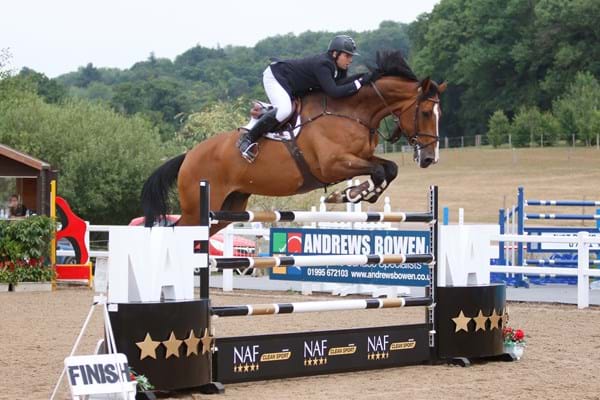