An opportunity to work as a talent scout for Premier League football club Huddersfield Town while studying for a degree has proved a winning combination for Hartpury student James Sharman.

James has spent the past two seasons analysing matches in the UK and Europe for the Terriers on a work placement module during a BSc (Hons) Sport Performance degree course at Hartpury.

Now, having achieved a first-class degree, he has agreed a full-time contract with Huddersfield for next season.

He was mentored in the placement role by Hartpury graduate Josh Marsh – now head of recruitment for Huddersfield.

“Josh was looking for video interns to do some work for him,” said James. “I had just picked up a career-ending injury, unfortunately, but I was keen to stay involved in football.

“The guys at the Sports Academy – Tom Staten and Marc Richards – said the role would be perfect for me and encouraged me to get in touch with Josh to express my interest.

“Initially, Josh agreed to take me on for a year, but when he offered me the second year, after the club had been promoted to the Premier League, I accepted straightaway.

“When I first went in, I didn’t know what to expect, but everyone I’ve met at Huddersfield has been brilliant, really supportive.

“Josh has pushed me and driven me on, encouraging me to use my own initiative, which is exactly what I’d hoped for, because whichever industry I go into after leaving university I want to progress as far as I can.

“I’ve been watching a number of matches at all levels of the game, and then reporting my observations back to Josh and scouting co-ordinator Chris Baker.

“Hartpury and Huddersfield have both been very understanding in enabling me to be flexible in terms of the time I spend on gaining practical experience with academic study.

“I’m thrilled to have accepted a full-time contract with Huddersfield for next season and looking forward to building upon the great experience I have gained so far.”

Hartpury works with more than 2,000 businesses to help its students find the right work placements and gain the skills and knowledge that employers are looking for.

James said the opportunity to gain experience in a full-time working environment outside college or university was an important aspect of any degree course.

“Nowadays, I think that if you go to university it’s really important to get work experience under your belt,” he said.

“If I hadn’t been at Hartpury, I don’t think I would have even thought about potentially becoming a football scout.

“Even if I had done, I don’t think I would have had the contacts to do so, or if I did, certainly not at Premier League level.” 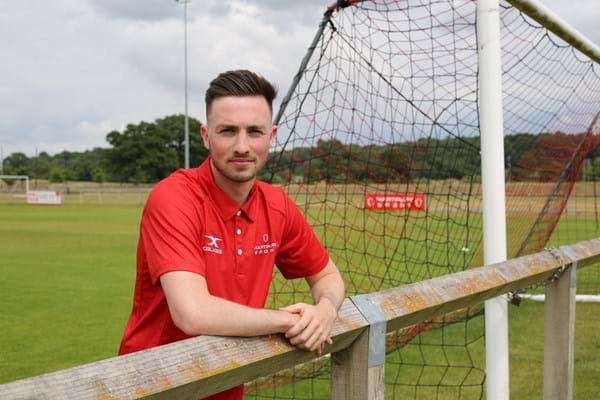