European champion James Cartwright will look to continue Hartpury’s outstanding success on the water when he competes for Great Britain at the World Rowing Junior Championships in the Czech Republic.

The Start programme athlete and second year A-level student will team up with Jake Offiler, with whom he won GB’s first-ever gold medallist at the European Junior Championships in May, and Bryn Ellery and Victor Kleshnev in the men’s quadruple sculls.

Ben Jackson, FE Lead Coach of Gloucester Hartpury Rowing Programme, who has been asked to coach the GB boys’ double, will join James at the championship (8-12 August).

“James should take a tremendous amount of confidence from his European title success going into the World Junior Championships,” said Ben.

“It’s fantastic to see all his hard work pay off, and an excellent opportunity to put together two years of hard graft at Hartpury in order to take on the best athletes in the world.

“Bryn and Victor won silver at last year’s World Junior Championships, when GB gained their best-ever haul of medals, so there’re plenty of big-race experience between the four of them.

James will take to the water in the wake of a series of impressive results for current and former Hartpury students, with first-year A-level student Rhiannon Morgan winning bronze at the Coupe de le Jeunesse regatta in Cork.

Her efforts helped the GB team win the overall competition and take second place in the women’s event.

A number of a former Hartpury A-level students impressed at the Under-23 World Championships in Poland, Charlotte Hodgkins-Byrne winning the women’s double, setting an under-23 world record in the process.

Zoe Adamson, who won gold in the junior double last year, won a bronze in the quad, while Sophia Heath was fourth in the women’s eight and Alice Bowyer sixth.

The quartet came through the Hartpury Rowing programme – a joint initiative between Hartpury, GB Rowing and Gloucester Rowing Club – aimed at identifying and developing the next generation of Olympic rowers. 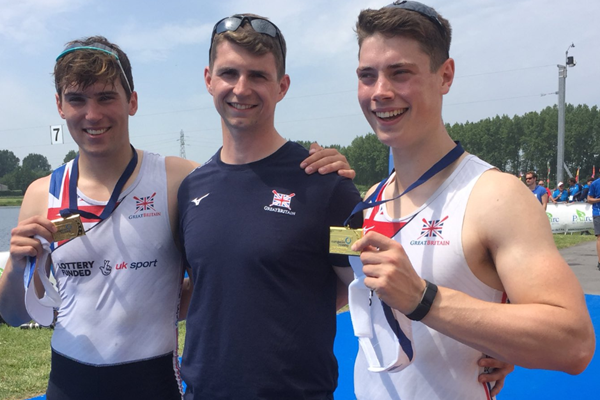