Representing Great Britain, the Start programme athlete and A-level student won a silver medal in the junior men’s quadruple sculls at the showpiece event at Racice in the Czech Republic.

Ben Jackson, FE Lead Coach of Gloucester Hartpury Rowing Programme, said: “James has put in a lot of work over the last two years at Hartpury.

“To go from never having sat in a rowing boat to European Champion and world silver medallist within three years is a testament to his drive and attention to detail.

“He’s a great example of how the GB Rowing World Class Start programme can effectively develop the right people in the right way to achieve results at the top level.”

As well as James, the crew featured Jake Offiler, with whom he memorably struck gold at the European Junior Rowing Championships in May, Bryn Ellery and Victor Kleshnev.

They finished runners-up in the final behind the Czech Republic boat after winning their first-round heat and semi-final.

Ben, who was asked to coach the GB boys’ double at the championships, added: “James and his crew have done incredibly well to come together in three weeks from clubs across the country to put in a truly world-class effort.

“Under the full pressure of the competition, the crew were able to deliver a top-quality performance against the best athletes in the world. They should be very proud of what they have achieved.”

The Hartpury Rowing ‘Start’ programme is a unique joint initiative between Hartpury College, the GB Rowing Team ‘Start’ Programme and Gloucester Rowing Club, aimed at identifying and developing the next generation of Olympic rowers. 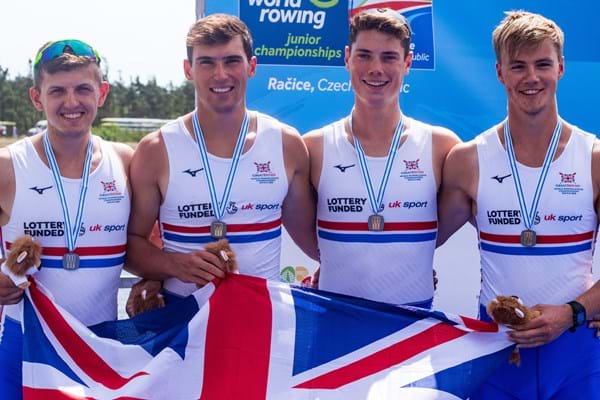